Pole and the Bear – two amigos! 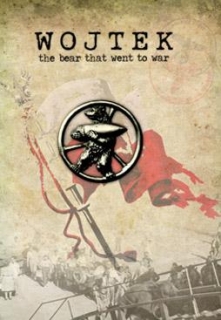 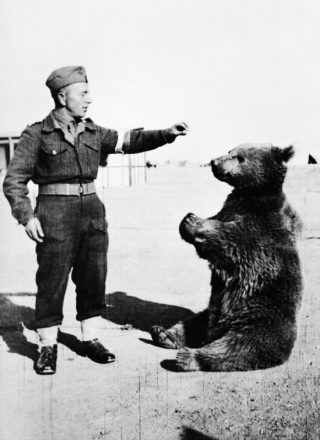 How to present a turbulent history of Polish soldiers fighting at Monte Cassino, a drama of emigration, a history consisting of both facts and dates, as well as internal dilemmas of an individual in the one-hour film? The best solution is to find an appropriate metaphor, which will cover the wide content. Will Hood and Adam Lavis didn’t have to look far, the idea appeared itself – a bear Wojtek, adopted by the 22nd Artillery Company of Procurement, which was a part of the 2nd Polish Corps of Ander’s Army, has stimulated the imagination of Polish emigrants for years, actually becoming their mascot.

A lot of monuments, portraits, and plaques commemorating the companion of Polish soldiers, who died in 1963 in the Edinburgh Zoo, are scattered all over the UK. The fictionalized documentary ‘Wojtek, the Bear that went to war’ is a part of this trend, but a message beyond this film is musch deeper than a tale of a domesticated animal. Every participant of the Play Poland Film Festival – a feast of the Polish cinema abroad, will find out this double meaning. ‘Wojtek’ is going to be screened on 3rd November in Summerhall, Edinburgh.
A story is as a fairy tale – a bear-orphan redeemed from slavery and adopted by Polish soldiers. He quickly domesticates and travels with a troop sharing with them both difficult and happy moments. Their activities such as a common wrestling (Wojtek had a chance to demonstrate his strength then) or parties with beer drinking and sleeping in one tent became legendary. He was officially enlisted into the 22nd Company, the animal traveled through Iraq, Palestine, Egypt, Italy – where he took part in the defense of Monte Cassino, to finally get to the UK. Although, he visited half of the world, he never got to Poland, because of the political situation, which maintained there at that time. In this way Wojtek’s fate became a suggestive symbol of the history of Polish emigrants in UK that is based mainly on soldiers fighting at the international fronts to defend their mother country, without chances to come back in times of peace. The bear, which was adored and until his death he had a perfect living conditions in a (golden) cage in the Edinburgh ZOO is a great metaphor of anticlimax, disappointment, regret, anger, longing, pique – the whole spectrum of feelings of so called Old Emigration. Those are the things that are raised in the film in a veiled and multi-faceted way. And this is how Wojtek the Bear continues in a perverse way a string of associations: the Bear – Lithuanian – Pole, which has been presented in a Polish culture for many years and used e.g. by Mickiewicz and Miłosz.
Screening of ‘Wojtek, the Bear that went to war’ will be a part of a wider project by Polish Art Europe – an institution organizing Play Poland Film Festival – devoted to the heritage of Old Emigration in UK.