It is time to start … 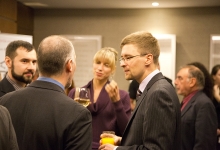 Finally, the 3rd edition of the Play Poland Film Festival started on 3rd of October. The grand opening gala took place at the Sheraton Hotel on Lothian Road. The gala was preceded by the screening of controversial “In the name of…” directed by Małgorzata Szumowska.

The film evoked intense emotions stirring lots of disucssionsas as the room quickly filled up with arriving in large number guests. The gala was graced with the presence of many brilliant guests such as Polish Consul Dariusz Adler or the actor and theatre director Tomasz Borkowy. This year’s special guest was one of the most well-known poster designers not only in Poland but also in the world - Andrzej Pągowski. His full of humour speech put the audience in a good mood andwas often interrupted by a wave of applause.

It is worth noting that the opening of the festival had a very international character. The evening event was honoured with the presence of such persons as the Consul of India Oscar Kerketta, Consul of Ukraine Mykhailo Osnach and the representatives of Russian Embassy as well as representatives of the European Commission and the the European Parliament Information Office. We welcomed also Mr Lesley A. Duncan, director of Scotpipe, Pipes & Drums, Simon Daley of the Lothian and Borders Police and Colin Greensdale, director of the Royal Scottish Academy of Art & Architecture.

The opening ceremony was led by Mateusz Jarża and Iwona Nowak – the organizers of the Play Poland Film Festival, Polish Consul Dariusz Adler and Mr Andrzej Pągowski, whose some of the most well-known posters accompanied the event. The works were attracted utmost interest as the guests had an opportunity to admire them for all the evening. Thanks to the presence of Mr Andrzej Pągowski we got to know fascinatingstories about many of the presented posters. The artist also gladly posed for funny photos with the guests.

One of our festival’s partners, the Seventh Crow also took part in the gala. We owe them big thank you for the splendid animation promoting the festival and exceptional professionalism in filming the opening gala. Thanks to the presence of media including our partner The Skinny the opening was fully documented. For those of you who couldn’t come for the opening we put photographs and a video on our website.

The course of the evening was very pleasant. We hope that next events of this year’s edition of the Play Poland Film Festival will be also be so well-attended and that the opening is going to be remembered for a long time by all the participants, we thank all of you for the presence and the participation.