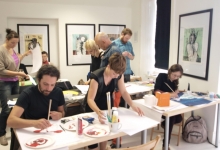 A two-day workshops series began on 4th of October at the Meow Studios. The workshops were held by the festival’s special guest and one of the most well-known Polish poster designers – Andrzej Pągowski. During the two days he was helping young creators while they were working on the design of their posters. Before the work started Mr Pągowski gave a short talk about the Polish School of Postersand his own works. The participants also had an opportunity to hear anecdotes concerning struggles with the censorship of People’s Republic of Poland. The theme of workshops was to create a poster that can promote the Play Poland Film Festival.

On the first day of the workshops participants took up creating the idea: they were drawing, sketching and working on the concept of the poster. On the next and last day serious work had to start. Thanks to the advice and hints of Andrzej Pągowski all of participants finished their projects on time. The results exceeded our expectations, the works differed a lot as participants displayed a lot of creativity with some really remarkable ideas. We would like to show the posters to the public and that is why we put the works on our website. Thanks to our partner, the Seventh Crow, the process of making the festival’s posters was fully documented on a camera. What is more, they interviewed our honourable guestof honour Mr Andrzej Pągowski and sowe hope to publish these results on our website soon. Opinions of participants were unanimous: the workshops as well as the possibility of meeting with the master were very inspirational for them.
That was not the end of attractions of the day.After the first part of workshops the Meow studios hosted the opening of an exhibition of Polish artists: Ewa Bińczyk, Igor Myszkiewicz, Maja Muciek and Sławomir Łukuć. The next day closed with a screening of the documentary “Behind the poster” directed by Marcin Latałło. We would like to thank for your attendance during the exhibitions, screenings and workshops.