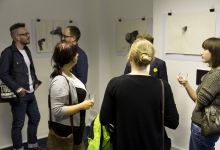 During this year’s Play Poland Film Festival visitors had an opportunity to take part in workshops and to see the works of talented Polish artists.

The first vernissage in Meow Studios on the 4th of October welcomed many international guests with a wonderful atmosphere and wine.The official opening of the exhibition was just after 6 p.m.Joanna Zielińska started off with a short speech, a brief introduction to the exhibition, and invited the audience for the festival screenings. Then, Ewa Bińczyk took the opportunity to say a few words about her works and encouraged everyone to see them. She added that she is willingly going to answer all the questions.

At first, guests seemed a bit shy but after a while they resolvedly rushed to see the collected works. Ambient talks about art, inspirations, and fascinations produced a remarkable atmosphere. One could not only enjoy great art but also a nice glass of wine.

Ewa Bińczyk presented her series called Idols consisting of twelve works made by the use of traditional etching technique. There is something mythical and fabulous to these works. They present a story of idols existing somewhere on the verge of oneiric and fantastic reality. They originate from childhood times but mysteriously become modern idols.

The author gladly answered questions about her technique and inspiration. Intrigued audience had a perfect chance to fill its curiosity.

Another artist presenting his works during the festival is Igor Myszkiewicz. He studied and works in Zielona Góra (graduated Lithography at the studio of Stefan Ficner at The Institute of Fine Arts and Culture in Zielona Góra in 1999).

Black Figures are black-and-white graphics reflecting gloomy atmosphere and fantastic thoughts on paper. The artist often surprises viewer with highly unusual images. Each work is a masterpiece of precision and an admirable attention to detail.

As he states: I work very traditionally- paper, ink, technical pen, ink pigments. I’m not looking for formal innovation and a new approach. I rather pay my respect to the ancient masters.

Maja Muciek, a graduate of Painting in the studio of Prof. Ryszard Woźniak at the Faculty of Art at the University of Zielona Góra , together with photographer Sławomir Łukuć created a series of photos and drawings titled Changes.

The author in her works mixes painting, photography, and other techniques to make them personal statements originally commenting the reality. Changes refer to the bodily aspect of human’s existence. The artist makes an attempt to describe our thoughts and perceptions in an unusual manner. She asks about the limits of our acceptance, tolerance, liberty, and wonders how we actually set them.

These original works confronted with photography gave the exhibition an intriguing dimension resulting in the mixture of the image and the state. Many guests took a while to stop and think about this unusual combination they encountered in Changes.

The exhibition generated a huge interest. Even though the venue was full of people, they still kept coming. Last guests left just before midnight. It was nice to know that information about the event spread widely. You could hear different accents and languages in the crowd. It is a real pleasure to know that many foreigners are interested in the Polish art.