Shot from the movie YUMA, by Piotr Mularuk

YUMA in the UK 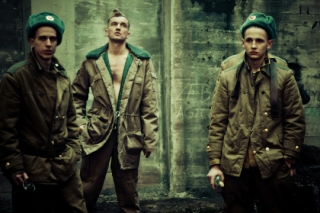 Promotion materials
Shots from the movie YUMA, by Piotr Mularuk

From August 31, cinemas in the United Kingdom and Ireland will show a feature debut of Peter Mularuk entitled "Yuma" with another great performance of a young actor Jakub Gierszała. The film is a combination of action film, comedy and romance. It is a story set in the first years after the fall of communism in Poland. A young boy, Zyga, becomes a king of petty theft near Odra riverbank.

The gala première of ''Yuma" with the filmmakers took place on August 30th in London. From the next day onwards, the film appears on screens of cinemas in Nottingham, Birmingham, Manchester, Bristol, Liverpool, Glasgow, Edinburgh and Dublin.
The tale of "Yuma" begins just a few years after the fall of Polish communism. The main character, a young Zyga (Jakub Gierszał), who is bored of doing nothing but admiring the colourful Western world as seen from across the border in youth magazines, together with his friends and a shrewd auntie (Katarzyna Figura) decides to take up "yuma" or in other words, a small theft, in Germany. This dirty business rapidly disseminates while Zyga's hometown undergoes a true economic boom. However, soon the young and furious get bored of "yuma" and "move on" to stealing cars. Young boys seem to be lucky until stumbling upon the ‘territory’ of Russian gangsters led by wayward Opat (Tomasz Kot), and regularly robbed Germans employ stricter means of security.
Director Piotr Mularuk made the film resembling a classic western in order to show that the origins of capitalism in Poland may be associated with the Wild West in the USA. The film's main character, Zyga has characteristics typical for a tragic role with his psyche torn between two opposing personalities. He is not a ruthless gangster nor a thief. He has pangs of conscience for the whole time, which he suppresses with giving away his spoils to others.
"Yuma" is a Polish-Czech co-production of Yeti Films and its distributor in the UK and Ireland is Giant Films. The main character is played by Jakub Gierszał, this year's Polish winner of the best young actor award - Shooting Star. The film also features Katarzyna Figura, Tomasz Kot, Tomasz Schuchardt, Krzysztof Skonieczny, Jakub Kamieński and Karolina Chapko. The script was written by Piotr Mularuk and Wojciech Gajewicz. The cinematographer was Tomasz Dobrowolski. The film was co-financed by Polish Film Institute (PISF).