An Interview with founder of the Play Poland 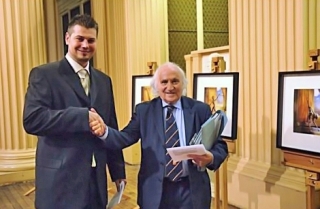 www.emito.net
Mateusz Jarża, the founder and director of the Play Poland Festival with Professor Richard Demarco

An Interview with Mateusz Jarża , the founder and director of the Play Poland Festival by Maciej Przybycień

Maciej Przybycień: Why organising a Polish film festival in the UK. Is it worthwhile?
Mateusz Jarża: We want to promote Polish art and culture and a film is a very good way to achieve this. Besides, the Polish cinema is missing here. There is one big festival, Kinoteka. However, they do not reach as far as we do. At the moment, Play Poland Festival is hosted by 10 cities: in the UK these are Edinburgh, Belfast, Glasgow, Liverpool, London, Newcastle, Birmingham and Oxford ; from this year we will also have screenings in Ottawa and Oslo.

MP: Polish films may not have had the best reputation recently. Let’s take the ones that first come to mind: Testosteron, Kac Wawa...
M.J: Polish cinema changes and evolves. The Poles are no longer interested in films such as Kac Wawa. Statistically speaking, more ambitious productions are now popular, e.g. "W ciemności" (In Darkness) or "Lęk wysokości"(Fear of Falling).
You may say that after all that we have seen during the Poland’s transformation process, we now finally have a new generation of filmmakers; directors who, colloquially speaking, are not warped with what happened in the past. They were born in a new era and talk about a new reality. They have a fresh perception of the world and address contemporary subjects.

MP: What is the target audience of the festival?
M.J: Our objective is to attract mainly British audience, but obviously all the Poles in the UK are welcome. We are aware, that the Poles who live here rarely have a chance to see those films. Last year we had as many British as Polish viewers. What is our aim? We would like the Polish film to be acknowledged as distinguishable. We have the French cinema, which is different than the American or the British one. We want the same for the Polish cinema. We want people to learn how to recognise Polish films and their uniqueness.

MP: What will we see? What is worth noticing?
M.J: Obviously everything (laughs). Ok, now seriously, this year we divided the festival into three parts: feature films, special screenings and poster exhibitions. I would like to say a few words about the special screenings. This year we will not only have short films, but also documentaries, animations, and shorter feature films. We have managed to get a good few film festivals, producers and film schools involved – all that has not yet reached the UK. We scheduled 11 screenings which are subsequently divided into two categories: film festivals and film schools. They will consist of films made in 2010 and 2011.

MP: Will somebody who lives in Edinburgh, Birmingham or Newcastle be able to see all the films?
M.J: Not immediately, but we will continue with the screenings until all the films are screened in all of the host cities. There are over 100 titles and we constantly get new ones coming in, so it is practically impossible to show all of them in one place at one time.

MP: Where can we buy the tickets?
M.J: It is best to browse your local cinema’s website. Also, the special screenings are free. For more detailed information I encourage everyone to visit our website (click here).

MP: Let’s come back to the poster exhibitions...
M.J: We have approximately 400 posters which were kindly lent to us by the University of Zielona Góra. These posters are from the 70s and the 80s and thus belong to the so-called Polish School of Posters. We can find there works of such renown artists as Flisak or Starowieyski. We will also display Polish posters made for American films. What is particularly interesting about them is that these posters were made by artists who never had a chance to see the films themselves. This is because of the Polish communist authorities of the time who censored the films from the West. The posters are really worth seeing...