YOU'RE A GOD by Leszek Dawid

Screenings of YOU'RE A GOD in the UK and Ireland 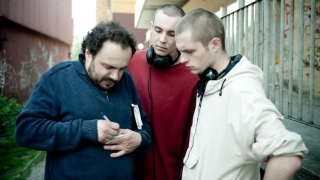 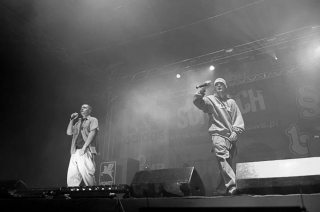 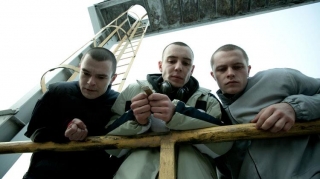 On 19th of September in London Leszek Dawid’s film ‘You’re a God’ will have its grand premiere and from the 21st of September the viewers will be able to watch it in the Cineworld theatres across the UK and Ireland. The film is a story of a legendary group – Paktofonika, which has irreversibly changed the image of the Polish hip-hop.

‘You’re a God’ by Leszek Dawid is a ten years awaited picture about three friends: Magik, Fokus and Rahim, the founders of a hip-hop group, Paktofonika. Their songs, especially the famous ‘I am God’, have become the voice of a generation of young Poles. Paktofonika was founded in 1998 in Katowice and the name meaning ‘a pact formed at the sound of a speaker’, was given by Magik and Rahim. The group has released three albums: ‘Kinematografia’(Cinematography), ‘Jestem Bogiem’(I am God) and ‘Archiwum Kinematografii’(Cinematography Archives), all reaching incredible sales volumes. Unfortunately, the media success did not go hand to hand with the financial one. The film perfectly portrays the collision of young, idealistic newbies just entering the phonographic business with the brutal world of media and publishers. The director exemplifies the powerless members of Paktofonika confronting the possessive reality of Polish music industry of late 90s’, which in turn was one of the causes of Magik’s suicidal death in 2000.

The story of making of the picture alone could make a separate screenplay. A scriptwriter, Maciej Pisuk decided to write about the young rappers from Silesian blocks when he read a report by Lidia Ostałowska in Gazeta Wyborcza ten years ago. Despite great popularity, the artists struggled with the market system and got into a conflict with the producers. The text was acclaimed as the best script of the years, became legendary but had no chance to be brought to life in such a raw and authentic shape as created by Pisuk. It was finally appreciated by director Leszek Dawid when in 2008 ‘Krytyka Polityczna’ magazine decided to publish it. Dawid together with Pisuk went to the chief executive of Kadr Film Studio – Jerzy Kapuściński, who enthusiastically welcomed the idea of making a film about the hip-hop group. However, it took four years to produce a film about the story of Paktofonika.

‘You’re a God’ is the second after ‘Ki’ feature film directed by Leszek Dawid. The main characters are portrayed by Marcin Kowalczyk (Magik), Dawid Ogrodnik (Rahim) and Tomasz Schuchardt (Fokus). They are accompanied by, among others, Arkadiusz Jakubik, Przemysław Bluszcz and Marcin Dorociński.

The Polish premiere took place during the 37th edition of Gdynia Film Festival and it was screened under Main Competition category. The production has received as many as 5 awards: for second film (Leszek Dawid), for professional acting debut (Marcin Kowalczyk), for acting in a supporting role (Dawid Ogrodnik, Tomasz Schuchardt) and the Wirtualna Polska journalists and internet audience’ award .

On 21st of September the film will be released simultaneously in cinemas across Poland, the UK and Ireland. The United Kingdom will witness the grand premiere on 19th of September in London with the participation of the director Leszek Dawid and the cast: Marcin Kowalczyk, Tomasz Schuchardt, Dawid Ogrodnik and Katarzyna Wajda. ‘You’re a God’ will be screened in the Cineworld theatres in London, Birmingham, Glasgow, Edinburgh, Luton, Southampton, Dublin, Nottingham, Aberdeen, Bradford, Northampton, Cambridge, Staples Corner, Feltham, Bristol, Rugby, Bedford and Burton upon Trent.

The latest information about the film, its screenings and the coverage from the London premiere can be found on the Facebook fanpage Jesteś Bogiem – na mocy paktu (You’re a God – pursuant to the pact).