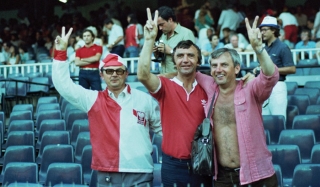 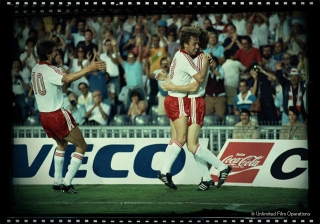 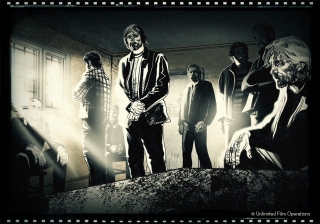 source: mundial82.pl
Animation from the movie showing the detained activists of "Solidarity"

Football, big politics and history. All these combined into one, unique entirety in Michał Bielawski’s documentary entitled ‘Wolrd Cup. The ultimate gamble’, which has its grand premiere on 30th of August in Gdańsk. The film tells a story of the Polish national football team with the introduction of the martial law in Poland in the background.

Bielawski’s documentary is a tale of sport and politics in particularly difficult for Poland time: in December 1981 the martial law was introduced in Poland, and a couple of months later the Polish football team took part in the World Championship in Spain. The Polish team achieved third place and that was the last major success of Polish football. The whole Poland was watching ‘the most beautiful TV series of martial law time’: spectacular goals of Boniek and Smolarek, skilful play of Lato, Kupcewicz and Buncol as well as parades of Młynarczyk. Poland watched the World Cup and for a moment forgot about the sad times of the martial law.
‘World Cup. The ultimate gamble’ by Michał Bielawski illustrates this period and successes of the Polish representation from many angles. The competition is watched by the detained activists of then delegalised ‘Solidarity’, sport journalists as well as censors whose purpose was to cut out all the traces of political opposition from the TV. The matches that were played in Spain are served to the viewer also from the perspective of players themselves. They try to satisfy not only their sportsman ambitions and fans. They also attempt to lift the veil of the regime propaganda and give the compatriots a beam of hope.
Bielawski has made a picture by combining archive footage of the FIFA, Polish Television and Polish Film Chronicle with animated photographs took on Spanish football pitches as well as of the detention camp. The director has also used interviews with some of Polish footballers, well-known sport commentators as well as oppositionists detained in Białołęka.

Michał Bielawski has already done some interesting experiments with the documentary genre. Last year Kino Polska channel aired programme ‘One scene’ on every Saturday, which Bielawski has co-created. The young documentary maker came up with an idea, where the black box-shaped studio witnesses a confrontation of two people – the director of the discussed film and a film critic, Michał Chaciński. The series was a homage paid to the Polish directors and the film school of 1965-1981. It has received a nomination to the ‘Grand Press’ award and Polish Film Institute award for 2011.

Michał Bielawski is a graduate of the Interdepartmental Individual Social Science Studies at the University of Warsaw and specialisation ‘Cultural Animation’ at the Institute of Polish Culture of at the University of Warsaw. He cooperated with TVP Kultura and Kino Polska channels, previously with Polish Radio 2. He writes to monthly issues of FILM, Art&Business and FILM PRO magazine. He is an author of many TV reports, film festivals coverages and interviews with the filmmakers. ‘World Cup. The ultimate gamble’ is his directorial debut.

You can find more on the project ‘World Cup. The ultimate gamble’ at: www.mundial82.pl