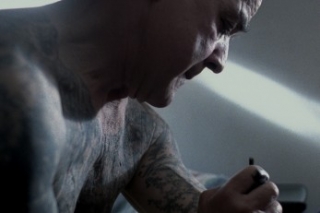 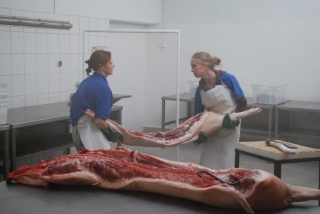 ‘Written in Ink’ („Co raz zostało zapisane”) directed by Martin Rath and presented at this year’s PLAY POLAND Festival Grzegorz Jaroszuk’s ‘Frozen stories’ („Opowieści z chłodni”) will take part in the 18th edition of Encounters Short Film and Animation Festival in Bristol (18th-23rd of September 2012). It is one of the most important world festivals where the short and animated films are presented. This year the main festival’s competition will see 188 best productions from 36 countries (22 European) selected from 1900 applicants.

‘Written in Ink’, dir. Martin Rath, Poland 2011
‘Written in Ink’ is a documentary about hope. It is an engaging story of a homeless person who after 14 years of silence tries to renew contact with his sister. His body is covered with tattoos. During the film we can see how parts of his life story become new tattoos. The camera follows the character without the use of interviews. Instead, it follows him via an intimate, silent contact. The documentary becomes an allegory of human life struggles.
The picture was awarded the ‘Black Pearl’ at the International Short Film Festival in Abu Dhabi in 2011 in the category: best documentary and received 2nd prize at the International Short Film Festival in Santiago for an ‘ability to extract sensitivity from the deepest corners of human soul, as well as for the individual language of the documentary narration’.
Martin Rath was raised in the East Berlin. He graduated from Edinburgh College of Art and currently studies directing at the Łódź Film School.

‘Frozen stories’, dir. Grzegorz Jaroszuk, Poland 2011
‘Frozen stories’ is a grotesque tale of a young girl and a boy, both working in the same supermarket. Announced the worst employees of the store they have to find a new goal and in just two days start a better, more meaningful life. Out of the blue comes help in the form of a popular TV show. The film is a deceitful tale about loneliness of two outsiders and their attempts to overcome a stalemate, all taking place in the coldest corners of a supermarket.
The picture was appraised on numerous occasions; it received, among others, Leopard of Tomorrow for best short film at the Locarno Film Festival 2011. It will be shown during this year’s PLAY POLAND 2012 Festival.
Grzegorz Jaroszuk – born in 1983 in Warsaw. He graduated from the Directing Department of the Leon Schiller National Higher School of Film, Television and Theatre in Łódź. During his studies he made six short films, some of which were shown at many international festivals in Europe.

Jury
The festival jury will have, among others, two Poles: Katarzyna Klimkiewicz, graduate of the Directing Department of National Higher School of Film, Television and Theatre in Łódź, director of films such as: awarded-winning Hanoi-Warsaw, Flying Blind, Krystian Lupa’s Labyrinth. Katarzyna Klimkiewicz is also a member of the European Film Academy and an expert in the Polish Film Institute. The second Polish member of the jury will be Jan Naszewski, among others, director of the New Europe Film Festival in Edinburgh.

Full programme of the festival can be found at: www.encounters-festival.org.uk.