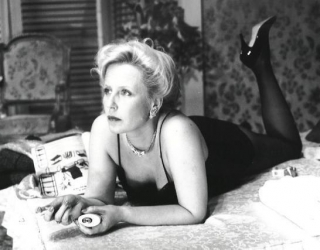 source: www.krystynajanda.pl
Janda as Maggie in a theatre play "Cat on a Hot Tin Roof"(autor: Tennessee Williams) by Andrzej Rozhin 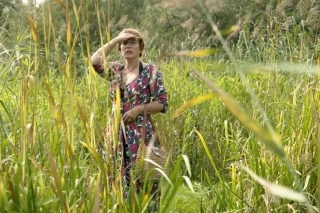 This October, an exceptional actress and director Krystyna Janda will be awarded the Golden Angel for Obstinate Creativity during the 10th International Film Festival Tofifest in Toruń. The award acknowledges the greatest personalities of Polish and European cinema. Among the award winners are, e.g.: Jerzy Stuhr, Bogusław Linda and Janusz Gajos.

Golden Angel for Obstinate Creativity as in line with the intention of the Tofifest director – Kafka Jaworska, is dedicated to filmmakers, who were able to paddle against the mainstream throughout their entire life and impress with courageous choices. Krystana Janda perfectly fits this description as an internationally renowned artist with a remarkable personality. Winner of the Golden Palm in Cannes for Ryszard Bugajski’s ‘Interrogation’ (Przesłuchanie), and the Silver Shell at the International Film Festival in San Sebastian for ‘Dismissed from Life’ (Zwolnionych z życia) by Waldemar Krzystek, she possesses an outstanding courage in both film and theatrical acting performances. Moreover, Krystyna Janda is a director as well as a founder of Warsaw’s two theatres – Theatre Polonia and Och-teatr. She is also a writer and active blogger.
In 2006, Janda received the Medaille Charlemagne from the EU authorities for an outstanding artistic work, dedication to achieve understanding between the East and West as well as her fight for equal rights of women. The actress was the first woman to have ever received this award. The artist has also been awarded with the Gold Cross of Merit by the Republic of Poland, Vittorio de Sica Award and the French Order of Fine Arts and Humanities Award.
Krystyna Janda has several important performances in the history of Polish film under her belt. In 1976 she debuted with the legendary Agnieszka in ‘Man of Marble’ (Człowieku z marmuru) by Andrzej Wajda. This role secured her the Zbyszek Cybulski’s Award and immortalised her in the Polish cinema.
Amongst her other memorable characters were those in ‘Man of Iron’ (Człowieku z żelaza) and ‘Without Anaesthesia’ (aka ‘Rough Treatment’, Polish title: ‘Bez znieczulenia’) by Andrzej Wajda, ‘My mother’s lovers’ (Kochankowie mojej mamy) by Radosław Piwowarski, ,Decalogue II’ (Dekalog II) by Krzysztof Kieślowski and ‘Inventory’ (Stanie posiadania) by Krzysztof Zanussi.
In the last years the actress astonished movie fans with her incredibly moving and personal acting in Wajda’s ‘Sweet Tush’ (Tatarak). Krystyna Janda has been awarded the Golden Lions at the Gdynia Film Festival on two occasions. She is also an astounding theatre actress, with over 60 characters thus far. Her repertoire is extremely diverse: from ancient drama through Shakespeare to contemporary plays. On the stage she has worked with the greatest names of the Polish theatre: Andrzej Łapicki, Andrzej Wajda and Agnieszka Holland. Janda has also directed 11 plays herself and played in most of them.
On the 25th of October, during the International Film Festival Tofifest in Toruń Krystyna Janda will present her extremely popular monodrama – „Shirley Valentine”.