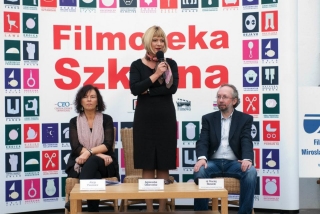 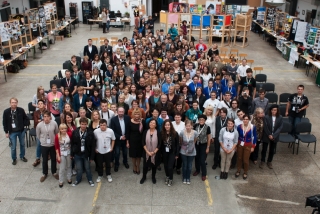 During the 3rd edition of the School Film Archive Festival held on 27th and 28th September in Warsaw youth from all over Poland showcased their films to the industry experts. The festival was broadcasted on the internet allowing students who could not participate in the event, to follow their peers.

The School Film Archive Film organisers were: PISF-Polish Film Institute, Centre for Citizenship Education and The Warsaw Film School. Over 120 students from all over Poland took part in the event. On 28th of September in Warsaw School of Film they demonstrated the fruits of their whole year’s labour to the film industry professionals. The festival programme included a projects fair, during which it was clear that film inspires young people not only to create etudes, school newspapers and craft work, but also encourage extracurricular activities.
Young people also had an opportunity to meet and consult their ideas with professional filmmakers. The organisers arranged for meetings with Joanna Kulig and Adam Woronowicz as well as film directors: Xawery Żuławski, Bartosz Konopka and Maria Sadowska. Students could also discuss their film endeavours with Katarzyna Klimkiewicz (director of "Hanoi-Warsaw"), Anna Kazejak-Dawid (director and scriptwriter of "Flying Pigs") and Grzegorz Emanuel (director of "General Nil"). The discourse between youth and the professionals may lead to new productions under supervision of experienced filmmakers. Such a situation took place last year, when a director and scriptwriter Paweł Sala supported work of the festival participants, also after its conclusion.
Among the experts there were also artists who are just a little bit older than contestants of the School Film Archive Festival including David Ogrodnik who portayed Rahim in "You are God" directed by Leszek Dawid. Moreover, Adrian Panek ("Daas"), Kamil Pole ("Switez") and Greg Zgliński ("Wymyk"), acclaimed at many film festivals for debuts, talked about their early career stories.

This year the organisers decided to enable all of those interested in the festival to join in on-line. Schools unable to send their pupils to Warsaw, were able to register via the Virtual Festival, which was held in parallel with the fair. Festival was streamed live on the School Film Archive website: www.filmotekaszkolna.pl .