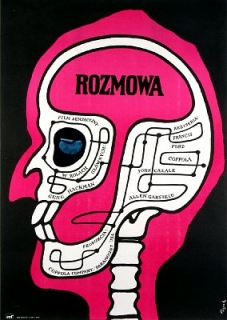 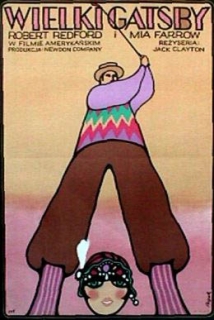 In addition to the film screenings, from 3rd of October to 12th of December POLAND PLAY festival 2012 will host an exhibition dedicated to Polish graphic designer Jerzy Flisak which will take place in the Sikorski Polish Club in Glasgow. The exhibition is divided into three parts, which together will display more than 35 film posters. The first part: October 3rd - October 30th, the second part: October 31st - November 20th, the third part: November 21st - December 12th.

Jerzy Flisak was born in 1930 and died in 2008 in Warsaw. He became noticed thanks to satirical cartoons in press, which he published in, among others, "Polityka", "Świat" weekly magazine - more than half thousand drawings in the series "Krasnoludki są na świecie" (Dwarves exist), "Świerszczyku" - series "Co robił nasz Bobik" (What is our Broadbean doing), as well as in "Kulutura", "Polska", "Przegląd Kulturalny". He owes his press debut to a competition run in 1950 by a satirical magazine "Szpilki", where he later worked as a graphic editor. In addition, he illustrated books for children and periodicals, as well designed scenery and animated film. Flisak is also one of the leading artists of the so-called Polish School of Poster. The exhibition in Glasgow will be entirely dedicated to his works. From 1955 Flisak worked with Centrala Wynajmu Filmow (Movie Rentals Centre). He designed several dozens of posters, including some of the most popular are excellent posters for American Western films. A classic example is the Comancheros (Polish title: W kraju Komańczów) from 1965. The exhibition will consist of around 35 works, including posters from Western films.

Flisak's posters are very diverse in terms of aesthetics and artistic forms of expression. The artist applies various techniques and styles in his work along with a use of famous historical quotes - Jak Iwanuszka szukał cudu (How Ivanushka the Fool Travelled in Search of Wonder), 1978; Ale heca and Ostatnia Ofiara (The Last Victim), 1976. He has a couple of typical painting-style posters under his belt (Snaha, 1977, Porpalo leto, 1974), in addition to photographic posters (Dowry, 1964), cut-outs (The Country I Come From, 1958), works employing techniques combined (The Terror with Women, 1958, Three me in the snow, 1958, Roman Holiday; Desire, 1959), and aymbols (Night itself in the same thecontemporary, 1968, American Night, 1974) as well as illustrative posters (Le Permis de conduite, 1975). What also distinguishes Flisak's work is simplicity and naivety of his pictures, painted, somehow reluctantly, with a thick paintbrush and saturated colours. It is this peculiar unaesthetic style of his posters and their diversity that make them interesting.

Flisak's works were showcased in Poland, among others, in Museum of Caricature, and abroad in Austria (Vienna, 1955), Canada (1960), Lebanon (Beirut, 1961), Denmark (1963), Italy (1964), Sweden (1965), Germany (Berlin, 1966). In 1961 he won the Minister of Culture and Art Award for artistic achievements and in 1985 the Office of the Chairman of the Council of Ministers Award. He also received several prizes from "Szpilki" and the Museum of Caricature in Warsaw. In 1962 he received the New York Art Directors Club Award for his poster for "The Hit Man".