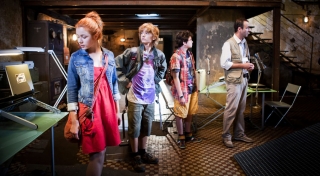 From 28th of September a new film by Wiktor Skrzynecki ‘Felix, Net & Nika And A Theoretically Possible Catastrophe’ is out in cinemas. It is an adaptation of one of the ten volumes of a popular young readers’ series by Rafał Kosik. The film is a story of three middle school pupils who, with help of the latest tech gizmos, solve all sorts of scientific riddles.

This extremely well written, with some educational aspects series was branded as youngster Science Fiction. The director, Wiktor Skrzynecki decided to adapt the second from ten of the series’ volumes. The film tells a story where three friends face a task of solving a mystery of an incredibly advanced weapon developed by Germans at the end of the World War 2. As one may expect from the science fiction genre the film features a whole lot of the special effects ie. Manfred, computer friend of the main characters . The production proved to be quite a test for the young actors as they had to play in scenes which required acting with invisible elements, later added with digital editing . Thus, finding young, talented amateur was a serious challenge for the filmmakers. Casting for the main characters had three stages and lasted almost two years. The makers really wanted to see the young actors portraying the protagonists to be the physically and emotionally closest tothe book characters to live up to the fans’ expectations. In the end the main parts are: Maciej Stolarczyk – as Net; Kamil Kiler – playing Felix and Klaudia Łepkowska who plays Nika.
The director hopes that the film will appeal to the young audience which would give a green light to start works on the next adaptation of the book. As of now the script for the seventh volume of the series – ‘Felix, Net & Nika and the Third Cousin’ awaits for the rating from the Polish Film Institute experts. The filmmakers really run against the clock as the actors are getting older.