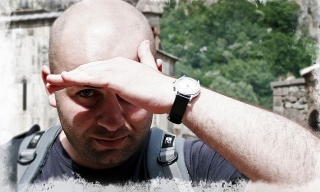 Our festival partners – Munk Studio and Wajda Studio commenced works on a short piece by Vahram Mkhitaryan – ‘Milk Brother’ (Mleczny Brat). The project is developed under ’30 minutes’ programme. A script is based on the story by Vano Siradeghjan ‘Lamb Brother’ (Brat Baranek). First works have already started in 2009.

‘Milk Brother’ is a tale derived from Armenian folklore. Full of fables, the film presents a boy who dreamed of having a younger brother . His mum is currently pregnant, which makes 10 year old Seto very excited.. Unfortunately the delivery results in a death of the baby and Seto is left with an immense grief. As a consolation for the mother ‘s suffering, Seto’s uncle brings a newborn lamb to be breastfed by his mum. Initially Seto can’t stand the situation and is hostile towards the animal but gradually he grows fond of his ‘milk brother’. Unfortunately, time passes, the lamb grows and a decision is made to let it go back to its herd. Once again, the boy has to handle a trauma of losing a sibling.
Director about the film: ‘The script is based on the story Lamb Brother by Veno Siradeghjan. I read it for the first time in 1998 when I was still a student. Still after 12 years this piece still moves and fascinates me, that is why I’ve wanted to make a film adaptation. A symbolical meaning of the lamb greatly intrigued me, it fills the void after a missing face, a face you wait for several months and throughout this whole time you try to visualise it: how it is going to look, who it would look like. All of a sudden there is no face, there is no little human being. Something has happened, but at the moment you can’t make any sense of it. There is a loss, but no memories. Perhaps you have to look for the lost face, you have to find it to miss it, mourn it and release yourself from fears, find peace. Suddenly you find something else. It turns out that the face you are looking for does not have to be human visage.
The script for the ‘Milk Brother’ was written in 2009 by the film’s director and Aleksandra Majdzińska from the Rehearsal Studio of Wajda School. In Spring 2010 in Armenia the crew shot a pilot scene of the film and after two years in June they returned to Caucasus to choose locations and pick the cast. The filming will last 11 days and in February the filmmakers will return to Armenia to work in a Winter scenery.
‘Milk Brother’ crew consists of Marcin Sauter as photography director, Alicja Kozińska as production manager with Joanna Szymańska from Wajda Studio overseeing the film as a whole. The project is financially supported by the National Film Centre.