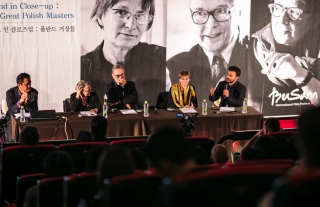 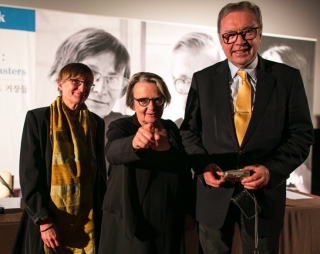 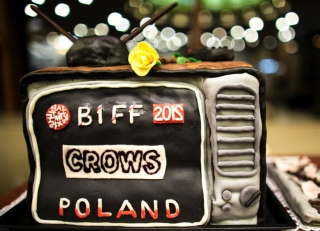 The conference with three Polish directors Agnieszka Holland, Krzysztof Zanussi and Dorota Kędzierzawska as guest speakers, was led by a film critic – Michał Chaciński and Cho Jae Hong, Korean critic and documentary director, specialist in the history of Eastern European cinema. The meeting was preceded with the screenings of the Polish cinema classics: ‘Night Train’ (Pociąg) by Jerzy Kawalerowicz, ‘Bad Luck’ (Zezowate Szczęście) by Andrzej Munk, ‘The Manuscript Found in Saragossa’ (Rękopis znaleziony w Saragossie) by Wojciech Jerzy Has, ‘Identification Marks None’ (Rysopis) by Jerzy Skolimowski, ‘Cul-de-Sac’ (Matnia) by Roman Polański, ‘The Promised Land’ (Ziemia Obiecana) by Andrzej Wajda, ‘Blind Chance’ (Przypadek) by Krzysztof Kieślowski, ‘The Year of the Quiet Sun’ (Rok Spokojnego Słońca) by Krzysztof Zanussi, ‘Crows’ (Wrony) by Dorota Kędzierzawska and ‘In Darkness’ (W Ciemności) by Agnieszka Holland.
The topics of the conference revolved around an auteur cinema, film studio systems and a significance of coproduction in the contemporary system of film financing. Agnieszka Holland invoked the history of the Polish Film School and its main representatives. The director pointed out how important the World War 2 is, serving as a global experience which shaped many filmmakers. She also reminded how the communist censorship affected = filmmakers by restraining them but at the same time motivating to talk about important, universal aspects with the use of symbolism and metaphor. Holland has also mentioned the activity of the Polish film studios which enabled the young creators to share their experiences and opinions on a given project. Krzysztof Zanussi has compared the post-war state of Polish cinema to the current situation of cinematography in Iran. The director has also pointed out that in 60s’ and 70s’ Poland had access only to a few chosen films from Western Europe and US. These were usually the classics of the world cinema, thus the Polish filmmakers in the communism period did look up to the best productions and, as Zanussi has stated – the bar was very high. Dorota Kędzierzawska has drawn the Korean audience’s attention to the fact that in the times of communism Poland had vigorously emerging auteur cinema as well as discussion-on-film clubs which invited the viewer to interpret the given productions in his own independent way and share that interpretation with others.
The directors have also mentioned that after the systemic transformation in Poland filmmakers had ‘choked on freedom’ which negatively impacted the cinema as it has become too explicit in its form, it has started to look up to the American cinema which resulted in losing the unique for Polish cinema grace as well as originality in speaking about the universal matters. It was also mentioned that in the 90s’ funds for film production were drastically cut which resulted in a drop in quality and eventually audience’s displease with the Polish cinema. Agnieszka Holland has noticed that during the post-transformation period the Polish film industry has lost contact with filmmakers in the rest of the world as old contacts were out of date. Moreover Polish films of the 90s’ and their topics ceased to appeal to the Western audience. The only exception were films by Krzysztof Kieślowski.
To finalise the conference the majority of the audience consisting of young people has asked the Polish guests for guidance for young students of directing. Krzysztof Zanussi recommended an original language and non-conformity: - I am a lecturer in Moscow on Gerasimov Institute of Cinematography, where I tell my students – you must be somehow special (…) When I was lecturing in Copenhagen in one of my classes I had a gentleman called Lars von Trier. He later wrote in his memoirs that I was a terrible professor. He was a terrible student but he is also a great director – Zanussi recalled.