Promotional materials from the movie YOU ARE GOD

YOU ARE GOD – the most watched film in Poland 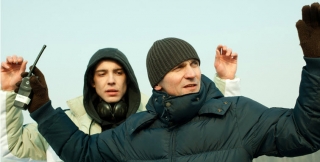 Only three and half weeks passed since the premiere of ‘You Are God’(Jesteś Bogiem) directed by Leszek Dawid yet the production has already become the most watched Polish film of 2012 in Poland. According to Poland Box Office the number of tickets sold has reached 1 237 455 on Friday 12th of October, making a movie about the Paktofonika group more successful than Oscar nominee picture by Agnieszka Holland – ‘In Darkness’.

Since an impressive first weekend, when Leszek Dawid’s picture has peaked as third best sales opening for a Polish movie of the last 20 years, ‘You Are God’ converts into a true phenomenon of the Polish cinema. After just 3 weeks of cinema screenings it has become the most popular Polish film of the year. Until now 2012 hits included ‘Madagascar 3’, reaching 1 694 066 viewers and ‘Ice Age 4’ (1 525 125 viewers). Fourth place as per the most watched production belongs to Agnieszka Holland’s – ‘In Darkness’, with 1 178 933 tickets sold.
Popularity of Leszek Dawid’s film stems not only from great marketing campaign but also from a fact that it is a story on a generation of people in their 30s, Solidarity coevals, who are the most frequent cinema goers in Poland.