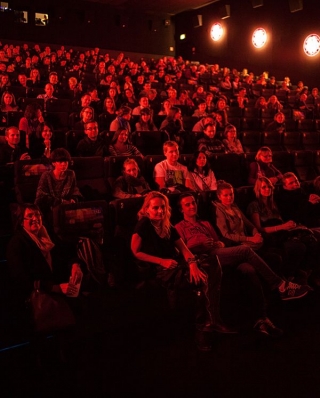 28th Warsaw Film Festival started on 12th of October. Since 2009 the event is listed on the FIAPF –International Federation of Film Producers Associations, grouping fourteen most important film festivals in the world. Each year notable personas from the film industry, directors, producers, film agents and distributors come to Warsaw. The event is supplemented with the CentEast Fair, which has become a significant meeting place.

Warsaw film event programme includes 130 full films – features and documentaries as well as 70 short films from 55 countries. This year’s edition of the festival gave audience the opportunity to see three Polish films not yet premiered in cinemas: Sławomir Fabicki’s ‘Love’ (Miłość) with stellar performances of Julia Kijowska, Marcin Dorociński and Adam Woronowicz, ‘Aftermath’(Pokłosie) by Władysław Pasikowski and Andrzej Jakimowski’s picture – ‘Imagine’, which will have its European premiere at the Warsaw festival.

120 filmmakers confirmed their attendance at the 28th Warsaw Film Festival, including directors, actors and producers from 37 countries. The directors – Daniel Burmani and Jan Hrebejek will present their pictures. Actress Alexandra Maria Lara, who agreed to play a leading role in ‘Imagine’ by Andrzej Jakimowski also plans to attend the festival. Apart from the film industry guests the festival will welcome a performance from Lisa Gerrar, vocalist of Dead Can Dance, composer for the picture ‘Samsara’ which will be screened at the festival.

Warsaw saw the biggest names of the film industry, interested in Polish and Eastern European productions. Thus, most notable film magazines such as ‘Variety’ and ‘Screen International’ sent their correspondents.

Since 2004 Warsaw Film Festival is accompanied by the CentEast Fair, which promotes pictures from Eastern Europe. The fair is particularly important meeting place for sales agents, distributors and festival jury members who have a chance to watch films still in development.

During the Warsaw event took place the FIPRESCI Warsaw Project - seminar for young journalists and film critics from Eastern Europe organised by the International Federation of Film Critics. In addition, Warsaw hosted workshops for Polish short filmmakers and open workshops ‘The Art of Editing’(Sztuka Montażu) which displayed skills of top Polish editors. Yet the crucial event that accompanied the Festival was a presentation of the China-Europe Film Promotion Project – CEFPP, which had been prepared from May 2012 by the festival organiser – Warsaw Film Foundation and Beijing’s Film Factory. The purpose of the project is to open the Chinese market to the European art cinema and help independent Chinese filmmakers to gain access to global festivals and distribution chains.

The Festival lasted till 21st October, you can read more on: www.wff.pl