BEHIND THE POSTER Runner up 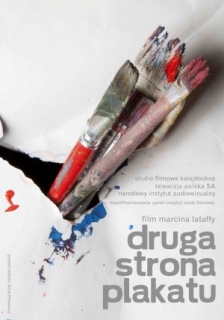 Marcin Latałło’s documentary titled ‘Behind the poster’ (Druga strona plakatu) has received a second prize at the Szolnok International Film Festival in Hungary. The film is a first documentary about the Polish School of Posters, one of the most important and renowned graphics schools of the 20th century.

In Marcin Latałło’s picture the history of the Polish Poster is told from a perspective of Anna Piesiewicz – graphics student, whose assignment is to make a poster for a film on Polish Poster. The protagonist gains access to the archive works of masters: Henryk Tomaszewski, Roman Cieślewicz, Jan Lenic, Franciszek Starowieyski and conducts interviews with leading Polish and French graphic makers: Mieczysław Wasilewski, Lech Majewski, Marcin Mroszczak, Andrzej Pągowski, Michał Batory and Michel Quarez. The documentary puts an emphasis on rich cultural relations between Poland and France. Several directors, including Andrzej Wajda, Agnieszka Holland and Krzysztof Zanussi as well as art historians and collectors also have their say in the film.

Polish School of Posters is one of the most globally recognisable movements of 20th century graphics. In the post war period up to 1990s’ the Polish Poster set art above the commercial aspect and through metaphors and symbolism encapsulated the essence of given phenomenon in an iconic picture. During communism poster served the artists as the tribune to express freedom, both ideological and artistic. Looking from today’s perspective the Polish Poster is a unique record of the post war Poland and a relationship between artists and the communist government of the time.

Marcin Latałło, director, producer and cameraman – was born in Poland (1967), raised in France and studied directing in La fémis (National Film School) and at the Cinematography Department of Łódź Film School. He worked with Krzysztof Kieślowski (The double life of Véronique, Three Colours), Agnieszka Holland and Andrzej Wajda. He made several TV documentaries and a short feature titled ‘Three Degrees of Separation’ (Trzy uściski dłoni) produced by Munk Studio under 30 minutes programme.