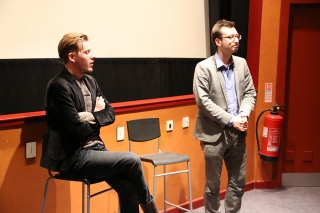 Photo by Mateusz Jarza
Screening of "The Canadian Dresses" in Edinburgh 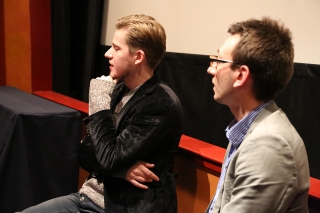 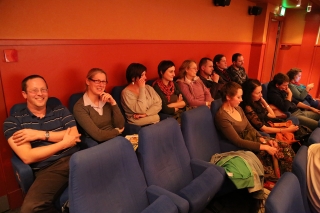 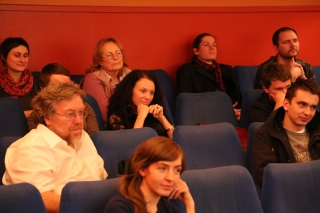 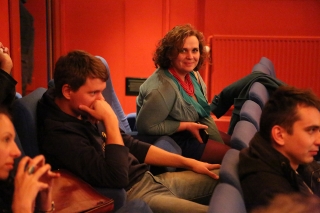 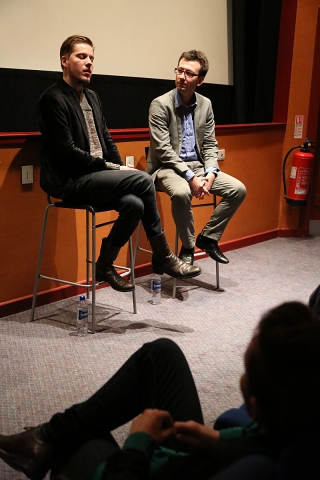 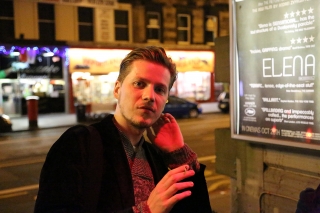 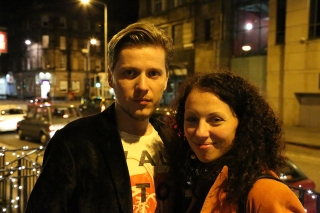 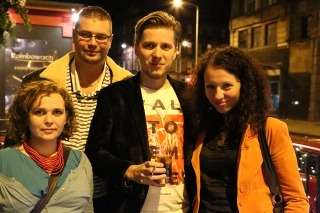 “The Canadian Dresses” is a story about Zofia and her daughter Amelia, who with her father moved to Canada. After ten years when Amelia returns to Poland her mother discovers the truth about her family; the story is based on factual events that happened to your family. Why did you decide to shoot this movie?

It was a basic desire in me to make this movie. It was very important for me to somehow portray my childhood. The movie is a tribute to a time in my life, which I have never experienced again, and for the remembrance of the people from that time, especially my grandparents.

How long have you been thinking about making “The Canadian Dresses”?

It wasn’t a sudden decision. I remember the moment when I first started thinking about it. When I was in high school I wrote a 20 pages long humoristic poem about my grandmother’s birthday. After that an idea evolved towards a movie script, but I wasn’t completely ready to do that then, nor did I have the means to shoot a movie. Only after many years I returned to the idea, I wrote a script and found actors that would fit the roles, it took time. This process indeed has been very long and complex.

How factual is the story from “The Canadian Dresses”?

I have to admit that it’s not the first time I have heard this question. I was obviously inspired with the place I grew up in and the people I was surrounded by. I pictured Sycewo, this city features in many of my movies. However the names of my characters have been changed. For me this is primarily a movie, more than anything else, and this is what the audience should be focused on. And for me as a director it is very important to talk about the movie in this context.

In the movie you tell the story of your childhood, and give importance to the Polish countryside during the 1980s. How were you comprehending what was happening in your childhood home at that time?

To be honest a little differently from the reality. In my memories it was a time filled with familial warmth, homely scents, and singing. I also remember a lot of people around a walnut table which we used to have. But the way I was seeing it was through a prism of naivety and childhood innocence. You can’t expect a little boy to understand what is actually going on. As children we create a utopian family image, an unblemished image of the place we want to remember and reminisce. But after some time we start expanding our horizons and the world becomes much more real. Then we realize that our childhood memories have had sometimes nothing to do with reality, while for somebody else the same issues haven’t been so pleasant. The movie is exactly about that, it shows it very clearly – especially in scenes of Zofia’s birthday. On the one hand we can see colourful dresses, flowers and tasty meals on the table. On the other hand there are lots of problems that the main character has to contend with.

Is it therefore an attempt at critically reviewing the past?

At some points in the movie there is an attempt of a more objective approach to the past. When you can see it on a screen, you realize what it was actually like. But that doesn’t mean that the world from your memories has disappeared. It’s about sharing an experience with others and bringing it to their attention.

Is the use of colour in the movie an expression of nostalgia for childhood?

In one way it is. But it has another important function, which is implied by the period the plot is set in. During the main events, which occur in the 1980s, warm colours are associated with women whom are dominant. When we are back in 1970s, blue and green are prevailing. In Canada the colours are kept to the minimum, it’s almost a monochromatic picture. The audience is subconsciously affected by this, but I think that we shouldn’t excessively analyse it.

How were you working on the script?

The writing process was quite difficult. At the beginning I interviewed all my family. I spoke a couple of hours with each of them. I was filtering their answers in my imagination, fitting it together into a whole picture and I started writing after that. In fact, there are some scenes and dialogues in the movie that had been drawn from the factual lives of the inhabitants of Sycewo. But there are also fictional things from the very beginning to fit the script. My point is to make an entirety from it.

An array of excellent Polish actresses features in “The Canadian Dresses”. I guess you have been asked about it many times, so let me ask you first about the male role of Stanisław (Arkadiusz Smoleński), who plays your father in the movie. What is his significance in the story?

Stanisław is actually a fictional character. The character of grandmother is the closest to reality, while other characters are adjusted to fit the script. Stanisław is the father of a boy who records an interview with a video camera during Zofia’s birthday. So it is possible to say that he plays my father in the movie, but please remember he’s not my father completely. Stanisław is a person who understands and accurately interprets what happens in the family house. As the eldest sibling he was with his mother for the longest time, so he knew a lot more than the rest of the family. He also felt responsible for his mother at some points. Even though the siblings were laughing at him because of his devotion and obedience, he was the one that understood Zofia. This is where the strength of this character lies.

Did you know from the beginning that Anna Seniuk should play Zofia?

Yes, absolutely from the very beginning. I was associating her with my grandmother very much. And apart from that, she’s one of my favourite actresses, not only on the Polish movie scene. I think she’s a genius on a global scale. It would be amazing to see her on the stage with Meryl Streep for example, it would be explosive.

And what’s more, Anna Seniuk is strongly associated with 1980s...

Yes, very much indeed. She played her most famous roles during that time. So did other actresses from the movie. For me it was very important that they’re all were my favourite actors that I’ve always wanted to work with.

So how did you manage to persuade them to work for free?

I’ve known some actors before; they knew me and my works. I didn’t find it difficult to persuade them to take part in this project. It was slightly different with Anna Seniuk. I’ve never worked with her before, so I didn’t know what to expect. At the same time I really wanted only her to play my grandmother’s character. So I gathered my strength, obtained her phone number, arranged a meeting and explained the issue to her. And everything’s turned out well. Mrs Seniuk called me after a few days and she agreed to play the role. It must’ve been hard for her, because she hasn’t been playing in features films for the past 30 years, not to mention the main role. Suddenly a challenge has emerged, which required her total commitment. She has admitted that she decided to play in the movie because she really liked the script. In fact all of the actors admitted the same.

And how come Justyna Steczkowska appeared in your movie?

I’ve been working with Justyna for nearly 10 years, mostly as a director of her video clips. She was also involved in my earlier movies. Her music featured on my first and second movie and she sang a vocals in my third production. She played a guest performance in “The House of Dolls” (“Dom lalek”). But in “The Canadian Dresses” I decided to joke a little. I wanted Justyna to play somebody who she has never played before. Normally, she’s like a diva on the stage, she wears a long dress’ and sings, whereas in a movie we can see her in a post office with her hair permed, sipping coffee and smoking cigarettes. In my opinion this scene is strange, but I will let the audience judge.

For what reason did Pola Negri appeared in the movie?

This is a very mysterious thread that has been cleverly weaved into the plot. It’s about stolen jewellery that one of the characters, Barbara, inherited from Pola Negri. It turns out that her husband steals the jewels to give them to his mistress and this is how intrigue is created in the movie. When I was writing a script I recognised that Pola Negri should appear in the movie because she is actually a part of the family. To simplify it, she was an aunt of my aunt and they were staying in touch for years. Apart from that Pola Negri was a world-famous actress; she had a great career in Hollywood. Nobody else has managed to do that after her. That’s why she had to be in this movie.

But you also appear in the movie in these scenes... Why?

That’s true, there’s a scene during Zofia’s birthday in which we can see a performance by Pola Negri in a TV somewhere on the background. And in exactly this moment we set the scene fifty years back in time and we watch Pola Negri singing a song for her new film on the stage. And then we appear there - together with my brother who is a producer of ‘The Canadian Dresses” – and we play our roles, I’m a Pola Negri’s director and he’s a producer. We recognized it as a joke. By the way, this is a very important scene in the movie, because we find out a truth about the stolen jewels, but I will better not spoil it by telling you about it.

How would you call your movie: an independent cinema or original production?

This is an original production. An independent movie contains of a film-school exercise and movies which are filmed with a mobile phones as well. I don’t think I’m an independent cinema author. Young artists shouldn’t be pigeonholed and asked to shoot only independent films; “The Canadian Dresses” is a full production that entered the polish cinema industry and so will be my next movie.

What are your future artistic plans then?

I would like to start shooting a new movie in March or April and I’ve almost found all the cast already. I wish to show it to the audience at the end of the year. I’m also writing a script to a new movie, which this time is going to be in the 1940s. I’ve have plans related to the video clips production too.

Can you give us away something about the plot of the movie which you plan for spring?

This is a story of a sixteen year old boy, who lives without a father, but he writes letters to him all the time and waits for a moment to get to know his address and finally send it to him. He grows up in a village, surrounded by women that aren’t able to understand him at all. What’s more, they hide the truth about his father. Then a boy goes to a high-school and after that we can see him in Lisbon. It’s going to be a comedy-drama with a very surprising ending.

Thank you for the interview.