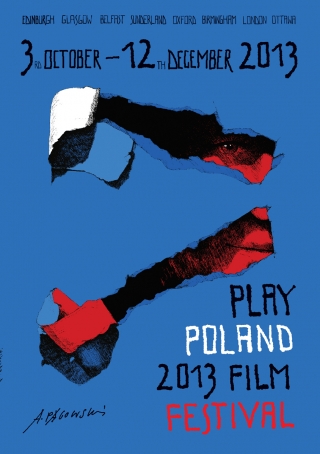 We are delighted to announce that Andrzej Pągowski – a prominent Polish graphic artist and creator of famous film posters and social initiatives (e.g. a poster for the ‘Cigarettes suck!’ (Papierosy są do dupy!) campaign) – designed a poster for the 3rd edition of the Play Poland Film Festival.. Consequently, this year’s close cooperation with the Master has been confirmed.

A mysterious self-portrait of Andrzej Pągowski emerges from behind a sheet of paper like a stranger who looks out from behind the curtain. A figure looks at the viewer through the peephole carved on a traditional flatness of the poster. This dynamic element creates a sense of depth and multidimensionality and forms a shape of Play Poland Film Festival’s logo, enclosing the essence of the event in a graphic picture.
The idea of the PPFF is to present cinema in a wide cultural context, to perceive it as a complex phenomenon which includes music, graphics, meetings with filmmakers etc. is The Polish Film Poster Exhibition is an integral part of the festival and as such takes place every year. It is a wide and precious material – Polish graphic artists, who worked in difficult for them times (‘70s and ‘80s) created space for the freedom of speech or rather a freedom of expression with the use of graphic image, which disguised censorship better than words. Relative freedom of action helped in developing an extraordinary phenomenon, which was later named: the Polish School of Poster Art. Polish graphic artists based their work on their own intuition and talent, often without even being able to see the films themselves.. Nevertheless, they succeeded in makingposters for foreignfilms which gained international recognition. This year's edition of Play Poland promotes this unusual group by screening the documentary ‘Behind the poster’ (Druga strona plakatu) and in particular with the presence of Andrzej Pągowski –one of the members of this movement. Pagowski will give a lecture and conduct workshops about the art of making posters while the exhibition of his art will be presented at every venue of the festival.
The poster designed by Pągowski for the PPFF shows how phenomena surrounding cinemat itself become more and more important at Play Poland every year.