EVENTS IN THE SUMMERHALL 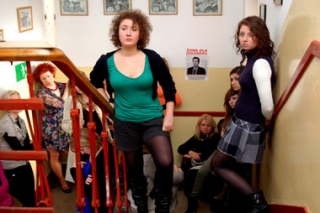 On 3rd October starts the 3rd edition of Play Poland Film Festival – a real celebration of a Polish cinema abroad. One of the Festival venues is the Edinburgh’s Summerhall. The projections of the short-length films from the Munk Studio, the University of Silesia, the Wajda School and the films recommended by the New Horizons are going to take place from 6th October till 3rd November . A real treat, not only for the ‘Old Polish Community’ but also for the other viewers, is going to be the film ‘Wojtek - The Bear That Went To War’ - the documentary of an animal companion of the 22nd Polish Corps of Anders’ Army soldiers. It is going to be exciting!

The film authors of the projection of the Munk Studio raise mundane events that lead to the dramas which are hidden behind them. They analyze the psychological, sociological and universal truths about the reality. Sometimes they do it in a playful way, sometimes it is disturbing, sometimes it is based on the author's script or on a literary text but it is always done in a professional and interesting way.
Some of the films were created by the students of the University of Silesia who introduced an evocative mosaic of a Polish reality. All that determines both the behaviour of the film characters and the course of events. Thanks to the films there appears a gloomy picture of Poland which is sometimes associated with Franz Kafka’s visions like in ‘Boo!’ by Kordian Kądziela.
The works from the Wajda School represent quite a similar tone. Most of the films balance on the verge of a documentary film and are inspired by the authentic stories (‘Losing Sonia’, ‘Take a look’, ‘The Dog Hill’ and ‘Black Daughter’). On the other hand, the plots that were created by filmmakers cannot deny their credibility as well. The realism in the presented films is their strong point. Even if they are pessimistic, in its expression they do carry a grain of truth, what is an optimistic feature.
The New Horizons films are characterized by high stylistic amplitude. There is a lot of fairy-tale, dreamlike fantasy and surprising perspectives. The Andersen fairy tales, Gierymski’s art, etc. were the incentives to realize the presented films. Plots swinging a few inches off the ground are brought down by a brutal reality including the war in Afghanistan or the Polish-Jewish conflicts.
A fairytale convention assumes unrestricted probability of any event. The fictionalized documentary ‘Wojtek - the Bear that went to war’ is maintained in this spirit but there is only one tiny difference that the story which is told in the film really happened! The fate of the animal companion of the Polish soldiers is extremely supporting metaphor of a situation of the “Old Polish Community Abroad’.
LINEUP:
6th October 2013, 6 pm
Special Screening:
‘New Horizons’, 111’, £ 4 – full, £ 3 – conc.
13th October 2013, 6 pm
Special Screening:
‘Munk Studio’, 130’, £ 4 – full, £ 3 – conc.
20th October 2013, 6pm
Special Screening:
‘Krzysztof Kieślowki Radio and Television Faculty/Katowice’ 112’, £ 4 – full, £ 3 – conc.
27th October 2013, 6 pm
Special Screening:
‘Wajda School’, 90’, £ 4 – full, £ 3 – conc.
3rd November 2013, 6 pm
Documentary:
‘Wojtek. The Bear that went to war’ (“Wojtek. Niedźwiedź, który poszedł na wojnę”) by Will Hood and Adam Lavis, 2011, 80’, £ 4 – full, £ 3 - conc.
Screening followed by Q&A