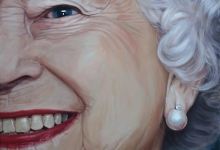 The festival also provides an opportunity to experience artistic representations of non-British artists. Polish Art Europe has been selected to oversee the Polish stall. Here are some highlights!
The Edinburgh Art Fair which returns for the 10th edition owes its extreme popularity to its format. Edinburgh residents have this rare opportunity to peruse dozens of British art galleries without having to travel elsewhere. This annual gathering of English institutions in Scottish capital has also its social dimension - creates a sense of community and cultural continuity of the United Kingdom. On this account, it is extremely meaningful that other nations, including Poland, can represent their country and take part in building British community.

Polish Art Europe has been entrusted with organizing Polish gallery thus has became Art Fair partner committed to promote the event as part of Play Poland Film Festival. The largest mobile film festival, set to begin in October attracts cinema lovers interested in the Polish culture – the audience that may also be interested in visiting Edinburgh Art Fair. We therefore strongly believe that both events will attract large and joint public.

The selection for the Polish gallery has been based on both works sent by the individual artist as well as Bohema New Art Gallery and Publish Art Association collections. The selected paintings provide the audience with an overview of Polish visual art and its distinctive features as well as art that remains in the opposition to the main stream culture. Ultimately, Poland will be represented by 6 artists:

The selected works are the effect of different means of expression and represent various art styles: from photorealism, through symbolism and eventually - abstraction. Despite extremely wide formal range, one can venture to find a common semantic content of the presented paintings. The artists by means of different measures, often instinctively, are trying to cope with the concept of Polish identity. Just like in “The Wedding” by Wyspiański, in a frantic artistic parade the audience faces heroes of the past (Mateusz Jarża – “Piłsudski”), today’s enemies (Seweryn Swacha – “Putin”), the allegory where tradition is swallowed up by commercialism (court jester Stańczyk embodied by McDonald’s clown – Seweryn Swacha), symbolic representations of national faults and contemporary state affairs (mainly works by Rafał Zara). Ultimately, comes a fine mosaic which should stir up a discussion on a complex issue of Polish mentality and encourage cross-cultural encounters.

Join us at the Edinburgh Art Fair – a place where art meets fun, the present meets the past and international organizations collaborate with the aim of providing audiences with the best experience of visual art.