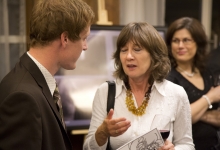 The opening reception of The 4th Edition of Play Poland Film Festival, organised by Polish Art Europe and hosted last week by Edinburgh's Sheraton Hotel and Filmhouse Cinema, was, without doubt, an exceptional event.

The Festival was inaugurated with the screening of 'Life Feels Good' by Maciej Pieprzyca, followed by a Q&A with the director. Based on a true story and narrated with a sense of humour, the film describes the life of Mateusz, who is diagnosed with cerebral palsy. A huge emotional response from the audience turned into a lively discussion. The director introduced them to the details of his work. He also shared valuable insights pertaining to the plight of disabled people in Poland in reference to the plot.

After that remarkable introduction, guests moved to the closely located Sheraton Hotel, which, for the purposes of this special evening, turned into the centre of Polish culture in Edinburgh. The official gala began with a speech from the main organisers: Mateusz Jarża - director of The Festival - and Iwona Nowak.

A welcome speech was delivered too, by the Consul General of The Republic of Poland, Dariusz Adler, and the director of Edinburgh Art Fair, Andy McDougall. Krystyna Szumelukowa spoke of the idea of cooperation between Polish Art Europe and the Wojtek Memorial Trust Foundation. Again invited to the podium, Maciej Pieprzyca immediately won the hearts of the audience with his gentleness and serenity.

Among the guests at the reception, were representatives of the British and Polish media, politicians, patrons of culture and many other outstanding guests - all of them attended the gala to show their support for this unique cultural event. Special guests of The 4th Edition of Play Poland included, the designer of the poster, Tomasz Płonka, and painter Michal Jankowski. The meeting lasted until late evening and the visitors had the opportunity to share their valuable comments and ideas. The evening was an exceptional celebration, not only for Polish cinema, but for building a platform of mutual understanding between the Polish and British nations. The evening was enriched by the exhibition 'Through the Director's Eye', under the tutelage of Prof. Krzysztof Hejke. Photographs, taken by the students of Lodz Film School, showed the world from the present perspective of the future directors.

This festival, only being held for the fourth time, is currently the biggest celebration of Polish cinema abroad. The event is co-financed by The Polish Film Institute, The Consulate General of the Republic of Poland in Edinburgh, Polish Community Association, Art & Business Scotland and University of Ottawa. This year's sponsors are Pangea Scotland magazine and Meow Photography Studios, where some of the special screenings take place. Thanks to the support and cooperation of the partners, Play Poland Film Festival will reach out of Edinburgh, to nine different destinations spanning all around the world: Glasgow, London, Birmingham, Belfast, Aberfeldy, Sunderland, Oslo, Ottawa and for the first time - New York.