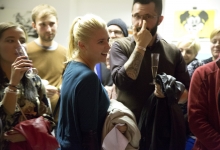 On the 10th of October in Meow Photography Studios, Edinburgh, a crowd of art lovers and friends of Polish Art Europe gathered to celebrate the birthday of Play Poland Film Festival - which they are the main organisers of - and seven years of promoting Polish art and culture abroad.

All the rooms in the studio on Friday night were filled with Polish contemporary art at its best. The exhibition "Reborn Babies", under the tutelage of Magdalena Swacha, presented the works of six young artists creating in the field of visual arts and new media: Marcello Zamenhoff, Seweryn Swacha, Anka Lesniak, Arti Grabowski, Diana Rönnberg, and Michał Jankowski, who this year was one of the special guests of the Festival. The talented painter appeared in person at the opening, which gave the audience a unique opportunity to talk with him about his work and inspirations.

More reason for celebration was the solo exhibition of Tomasz Płonka's graphics, which you can find on this year's poster for Play Poland. Shown as screen prints and full of comic references, the works attracted attention with their rich colours and strong means of expression. This was best exemplified by the festival logo, which, for the occasion, the artist painted on the wall of Meow Studios. That design has become a favourite background for photographs with our guests. Maciej Pieprzyca was frequently invited to accompany them, when the director of 'Life feels good' graced the event with his presence.

In such company, the birthday party of Polish Art Europe simply could not go wrong. With the electronic sounds of the  DJ collective Studio4Collective, our guests enjoyed themselves almost to midnight, celebrating with champagne and lots of cookies baked for the occasion. Passing through the studio, they had the opportunity to meet our special guests, talk with them about their work, impressions of the festival and time in Edinburgh. Many of them carried bags and T-shirts, which they won in our birthday lottery held the same evening.

We thank all participants and invite everyone to the next festival events in Edinburgh:

We also plan further raffles of The Festival gadgets on Facebook: