A dynamic development of Polish film poster art goes back to the period between 50's to the end of the 80's. Paradoxically enough, it was during the socialist period when - despite being cut-off from the rest of the world and having each aspect of life continuously monitored by totalitarian authorities - Polish artists produced the original and unique style poster, currently recognisable around the world. Perhaps it was this constant surveillance and censorship that have contributed to the origins of such succinct and intelligent forms of Polish poster. In addition to the fact, that each of the artists has developed its own, unique character of his/her work, Polish Film Poster is particularly known for: simple form using a smart, often a full of humour and fantasy metaphor or illusion as well as its high artistic standards: pictorialness, linearity, live colours. In contrast to Western posters, based on photographs and movie stills, Polish projects were more graphical, structured, and clear. They were based on a principle of subtracting rather than adding. It is difficult to imagine today how abstract were the situations the graphic artists have found themselves in at the time. When receiving an order for a design of a foreign film poster, often they did not have access to any source of information on the film whatsoever, neither photos nor description, not to mention the film itself. As Jan Lenica, one of the leading and most renowned in the West Polish designers, used to say:

Polish poster, which because of its "oddity" had achieved great international success so rapidly, was original, as we were isolated from the Western world and it did not resemble anything else, as we have seen very little and have been completely on our own. 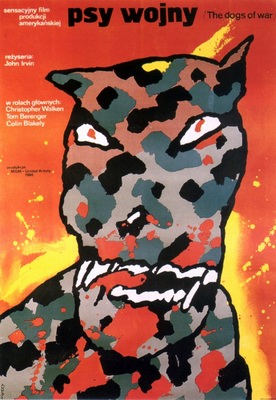 The artists had to compensate the lack of information with creativity and imagination. Posters were often designed based solely on a film title. A good example may be the poster by Waldemar Świerzy for "The Dogs of War" ("Psy wojny") directed by John Irvin, which seeks to combine in one form signs relating to a dog, a symbol of war and sense of violence, so everything what can be find in the title. Therefore on the poster we see a simple sketch of a dog, noticeably full of wickedness and aggression, with a military uniform ornament in its body. As Jakub Erol has said:

A good poster is always an interpretation. A picture tells us something, while a poster is as a road sign, must be clear and convey the very core of things. I once designed a poster for "Operation Arsenal". There is a symbol of Polish resistance made of a composition of Polish scouts' crosses. The message is very simple, but it is also very clear.

The most recognisable names of the Polish School of Posters are among others: Franciszek Starowieyski, Jan Młodożeniec, Mieczysław Wasilewski, Jakub Erol, Jerzy Flisak, Jacek Neugebauer, Jerzy Treutler. Most certainly their works are something much more than just products of advertising. Each of the posters can be analysed as an independent piece of art, loaded not only with an original, diversified and personal style of an individual author, but also with inspirations from history of art, mass culture or literature. For example, posters by Franciszek Starowieyski are full with the baroque symbolism and forms are full of finesse, glamour and ravenous expression. The works of the artist are dominated by: Rubensian female bodies, as well as bones, skulls, birds’ heads and insects. The baroque aesthetics are skilfully used by him to express his own surrealistic vision. For example on the poster for the film "Mademoiselle", directed by Tony Richardson, Starowieyski plays with baroque motif of a moth as the symbol of death. The body of Mademoiselle is armed with a pair of tiny wings, and instead of a human head the woman has a head of the insect. Starowieyski refers to the film's plot, which tells a history of a woman, who is madly in love and who, due to her affection, causes fires, floods and other disasters. Thus the poster by Starowieyski illustrates a woman as a perpetrator of suffering and death. Jan Młodożeniec, another representative of Polish School of Poster, employed a completely different approach from Starowieyski. In contrast, Młodożeniec uses a thick line with confidence, which may resemble a childlike drawing. His posters are characterised by a minimalism, live colours and a peaceful, synthetic composition. Młodożeniec was inspired by such artists as Fernand Leger, Pablo Picasso, Georges Braque, Henri Matisse, Paul Klee. As his inspirers he enjoyed colour as means of emotions’ expression, geometric forms, etc. Just to recall examples of posters for films such as: "Woman in a Hat" (dir. Stanisław Rożewicz), ,,Je t'aime, chérie” (dir. Roland Oehme). Having fun with form was feature of work by yet another artist, Jakub Erol. Many of his posters are based on a natural shape of a human body or an object then supplemented by the author with an external element. This technique changes completely the meaning of a picture, creating a deceitful riddle. Erol's own words best reflect the core of his art:

A composition brought to the absolute minimum in its faded form and colours, despite using well-known symbols, is free from banality.

For instance the poster for Janusz Kidawa's "Ultimatum" employs two colours, black and white, and presents a white, reversed stool, without one leg, and three other ones ending with men heads in masks. The symbol relates to the film, which tells a history of four assassins, planning to attack the Polish Embassy in Brno. Eventually their plan fails as their bombs turn to be imitations and, in the conclusive moment, one of the men decides to remain faithful to his political cause and deploys a hand grenade. The poster is therefore a riddle becoming understandable only after we have seen the film.

This sensation of the Polish Film Poster can be called an ‘international phenomenon.’ These posters make their own stories, take viewers to their own, unique world. They often constitute an interesting brain-teaser, bring a smile. This allows them to be standalone works independent of the relevant films. They are fully valuable works of art on their own. Thus, we would like to invite you to familiarise yourselves with this particularly interesting phenomenon during more than a dozen exhibitions of Polish Film Poster, which will be held during the Polish film festival Play Poland 2014 in 10 cities in the United Kingdom, Norwey, Canada and the United States of America.