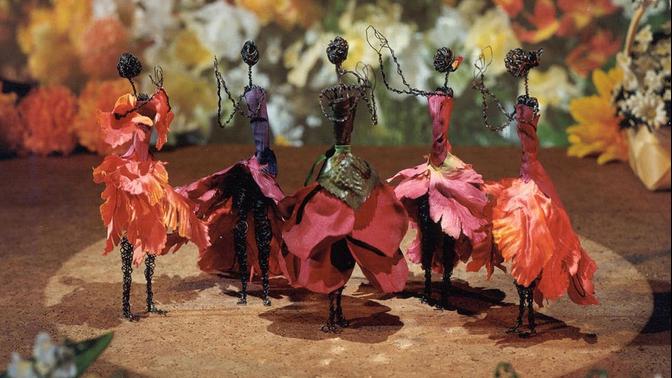 “Fantastyczny sklep z kwiatami” (“The Fantastic Flowershop”) is a magical story about a shop which magically livens up after the owner has left. Spools of wire unroll, wind in the air and interweave making figures of men and women. The latter dress up in petals of colorful flowers and when they are all properly dressed, a flower ball begins.

Paweł Partyka
Pawel was born 1948 in Katowice - Poland. The founder of Partyflex System film studio. He is of Polish origin but lives in Denmark/ Musician - one of the founders of famous Polish band in the 60ties and 70ties 'Zdrj Jana'. In the 70ties and 80ties of the XXth century he worked on feature films as Assistant Director. The author of animated, documentary and educational films. He popularized Danish writer Hans Christian Andersen in Poland. Pawel worked closely on "The Fantastic Flower Shop" with Frances Oesterfelt who wrote the screenplay, made the puppets, and was the production designer. Frances is an American, living and working creatively in Denmark since 1975. Scientist, dentist and doctor of odontology. Lectured at medical academies on all continents and authored several world-acclaimed textbooks in dentistry. In the fine arts, she developed her own technique of creating three -dimensional objects from papier-mch and fabrics. Experimented in combining blown-glass with three dimensional objects created from wire, which became the inspiration for the creation of the scenario of the film, "The Fantastic Flower Shop." Her works have been presented at exhibitions in several-dozen European countries, as well as the USA and Australia.