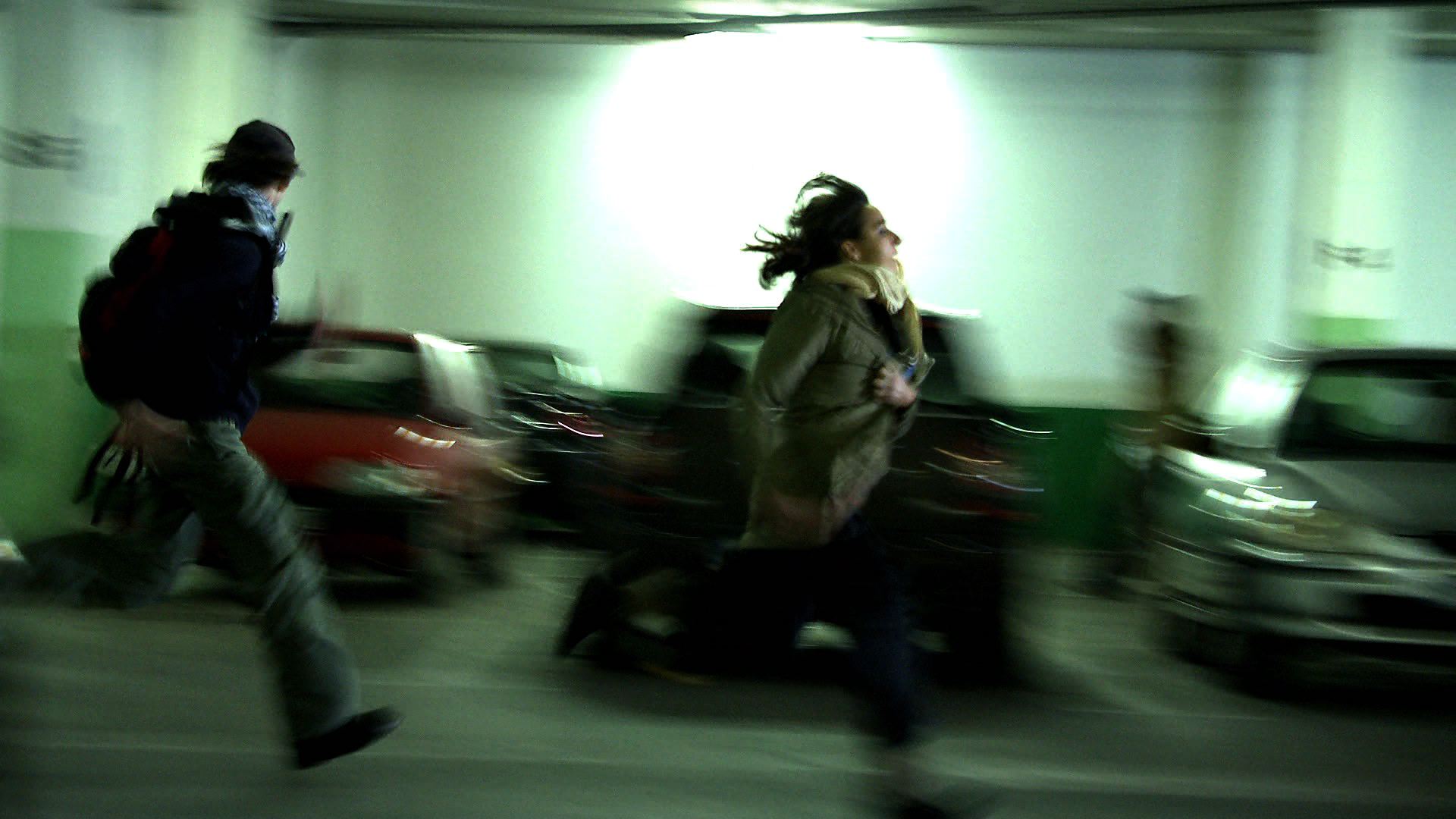 Below are synopses of the individual short films comprising “Dekalog 89 + VOL. 1” and the
directors’ dossiers.

“Nowa” [Newbie] (dir. Tomasz Olejarczyk)
Seeking for acceptance in a group of peers
playing risky urban games, 17-year-old Ania
(Newbie) losses faith in her values. With
nothing to lose, she comes up with a game to
provoke the group – especially its leader
Czarny – to think. In surprising conclusion of
the film, the characters are given new chance to
return to normality. Film is based on the short
story “Moc słowa” [The Power of Word] by
Anna Czajka, the film corresponds with the
Second Commandment: “You shall not take the
name of the Lord your God in vain.”
Tomasz Olejarczyk – born in 1974, lives in Łódz, an actor, screenwriter and director; a graduate
from the Ludwik Solski State Theatre School in Wrocław; co-director (together with director
Jarosław Sztandera) of the award winning, both in Poland and abroad, short film “Luksus” [The
Luxury].

“Street feeling”
(dir. Kristoffer Karlsson Rus)
Two young people steal spray-paints from
a supermarket to paint a huge graffiti across
windows of Tomasz’s (a graphic designer)
apartment. Meanwhile, Tomasz is working on a
project of a commercial that is supposed appeal
to young people. Film is based on the short
story ”Koperta” [The Envelope] by Artur
Wejner and corresponds with the Seventh
Commandment: ”You shall not steal.”
Kristoffer Karlsson Rus – born in 1979; screenwriter and director coming from a Polish-
Swedish family; graduate from the Stockholm Film School and film course at Andrzej Wajda
Master School of Film Directing; he lives in Warsaw.
“Newbie”, dir. T. Olejarczyk, pict. Sandra Staniszewska, Justyna
Wasilewska and Justyna Domaradzka
“Street Feeling”, dir. K. Karlsson Rus, pict. ZdzisławWardejn
and Tomasz Sapryk

“Real” (dir. Rafał Samusik)
Anna mother of 16-year-old dying of cancer
Adas, is desperately trying to find Wiktor, an
author of internet blog. Wiktor claims he found
cure for cancer. Anna’s night journey through
real and virtual worlds ends with a shocking
discovery. Film is based on the short story
”Płomyk za szyba” [Flame Behind the
Window] by Marcin Kaczmarek and
corresponds with the Tenth Commandment:
“You shall not covet your neighbour’s goods.”
Rafał Samusik – born in 1978; screenwriter and director; graduate from University of Silesia
Krzysztof Kieslowski Radio and Television Department in Katowice; author of frequently
shown at different film festivals documentary “Gry wojenne” [War Games]; he comes from
Białystok and lives in Warsaw.

“Moja biedna glowa” [My Poor Head] (dir. Adrian Panek)
After wife’s death, the father of 16-yearold
Wojtek, has nervous breakdown and
loses touch with reality. The authorities in
Wojtek’s school already know about the
problem. If Wojtek’s father doesn’t prove
the ability to look after his own son,
Wojtek will be taken to an orphanage.
Wojtek has only a few hours to handle the
situation and find a way out of trouble.
Film is based on the short story “On”’ [He]
by Joanna Łabuz and corresponds with the
Fourth Commandment: “Honour your
father and your mother.”
Adrian Panek – born in 1975; screenwriter and director; graduate from University of Silesia
Radio and Television Department in Katowice and film course at Andrzej Wajda Master School
of Film Directing; author of short film “Meczenstwo Mariana” [Marian’s Martyrdom] made
within first edition of the programme “30 minutes”; he lives in Warsaw. Film was awarded with
Grand Prix “Goldene Reiter” for “My Poor Head” at 22. International Short Film Festival
FILMFEST Dresden 2010.
“Real” dir. R. Samusik, pict. Agata Kulesza
“My Poor Head”, dir. A. Panek, pict. Mariusz Bonaszewski

“Filizanki Yoko Ono” [Yoko Ono’s Cups] (dir. Andrzej Mankowski)
19-year-old Janka comes from a catholic
family. She lives together with her parents
in a small town near the eastern border of
Poland. One day she meets an eccentric
Russian woman – Sara. The feeling that is
waken in result of the encounter becomes
for Janka both beginning of sequence of
trials and reflections upon her own life.
Film is based on the short story “Filizanki
Yoko Ono” [Yoko Ono’s Cups] by Gabriela
Bedkowska and corresponds with the Ninth
Commandment: “You shall not covet your
neighbour’s wife.”
Andrzej Mankowski – born in 1973; screenwriter, director and film producer; graduate from the
Academy of Music in Gdansk (1998); a student of Postgraduate Study of Scriptwriting at the
PWSFT Łódz Film School (2000-2002); author of the awarded documentary “The Music
Lesson” (Prix Italia 2007, among others) and the fiction film “Ruby Wedding” (special award at
the 33rd Polish Film Festival in Gdynia and Laboratorium Award at 10. Polish Film Festival Los
Angeles); initiator and producer of “DEKALOG 89 +”; he lives in Gdynia.

Below are synopses of the individual short films comprising “Dekalog 89 + VOL. 2” and the
directors’ dossiers.

“Pod wiatr nie popłynie słodki
zapach kwiatów” [The Scent of Flowers
Does Not Blow Against the Wind]
(dir. Leszek Korusiewicz)
Andrzej (Bartosz Opania), popular film
stuntman, is a happy husband and father. It
seems that the nature of his profession does
not perturb his family’s idyll. Then how
explain the anxiety that arises with new
risky undertaking that Andrzej is involved
in? Film is based on short story by Joanna
Kocemba “Tecza” [Rainbow] and
corresponds with the First Commandment
“You shall have no other gods before me.”
Leszek Korusiewicz – born in 1978; graduated from University of Silesia in Katowice, major
in philosophy at Social Science Department; he also studied film directing at Radio and
Television Department. Author of documentaries, commercials and TV features, and most of all
director of study features “Pat,” [Stalemate] “Dlaczego drzewa sie poruszaja,” [Why Do Trees
Move] and “Papieros” [Cigarette]. He lives in Chorzów.

“Sublokator” [The Lodger]
(dir. Marcin Bortkiewicz)
Kasia (Klaudyna Lewczuk) is a dance
school student, who lives with her mother
(Ewa Kasprzyk) in a spacious apartment.
One day, mother rents spare room to an
under-tenant – sport school student. Kasia
and the boy strike up an original
acquaintanceship – without words and
meetings. Film is based on short story
“Swiezo malowane” [Fresh paint] by
Bogna Hołynska and refers to the Sixth
Commandment “You shall not commit
adultery.”
Marcin Bortkiewicz – born, 1976; graduated from University of Gdansk major in Polish
Philology and Andrzej Wajda Master School of Film Directing. As actor, screenwriter and
director for many he was associated with Theatre Centre “Rondo” in Słupsk. His film output
include among others “Cisza” [Silence] and “Nauczanie poczatkowe” [Primary Education]. He
was awarded with Polish Competition Jury Honours at the 49th Krakow Film Festival. He lives
in Warsaw.
“The Scent of Flowers Does Not Blow Against the Wind” (dir. L.
Korusiewicz), pict. Bartosz Opania
“The Lodger” (dir. M. Bortkiewicz), pict: Ewa Kasprzyk and
Klaudyna Lewczuk

“Ogrodzenie” [The Fence] (dir. Tomek Matuszczak)
Mother (Maria Seweryn) and daughter
(Michalina Rodak) live alone in a small
cottage on the village outskirts. The
appearance of a mysterious man
perturbs their close relations. Will the
women be able to avoid mutual
jealousy and distrust? Film is based on
short story “Oliwka” [Olive] by
Aleksandra Duda and refers to Eighth
Commandment “You shall not bear
false witness against your neighbour.”
Tomek Matuszczak – born in 1979; graduated from The Polish National Film, Television and
Theater School in Łódz, major in film directing. He directed many short films including “Nowy
Dzien” [New Day], “Papierosnica” [Cigarette Case] and “Autonaprawa” [Car Service]; he was
also 2nd director (first assistant director) on the set of “Afonia i pszczoły” [Afonia and the Bees]
directed by Jan Jakub Kolski. He lives in Warsaw

“Za burta” [Overboard] (dir. Bartosz Paduch)
Adam (Michał Kowalski), yacht designer,
is workaholic neglecting his family. At
present, he is around the bend with his
life. Will his childhood sentiment –
memories of part taking in Fishermen’s
Sea Pilgrimage – give him strength to
fight to get his private life together? Film
is based on short story “Zwykła niedziela”
[Usual Sunday] by Wojciech Paweł
Kowalewski and corresponds with the
Third Commandment “Remember the
Sabbath day and keep it holy.”
Bartosz Paduch – born in 1979; graduated from University of Silesia, major in film and
television directing at Radio and Television Department. His output includes many short films
inter alia “X2,” “Bez wizy” [Without Visa], and also documentaries such as “Pułkownik Dabek.
Obrona Gdyni 1939” [Colonel Dabek. Battle of Gdynia 1939] and cycle “Sztuka dokumentu”
[The Art of Documentaries]. He has won many awards incl. I Award at 2006 SOFA –
Independent Film Festival in Gdansk, Grand Prix at 2007 Best OFF Festival in Warsaw, the
award for Best Pomeranian Film and Artist at 2007 Sopot Film Festival. He lives in Gdansk.
“The Fence” (dir. T. Matuszczak), pict: Maria Seweryn
“Overboard” (dir. B. Paduch), pict:Janusz Chabior and Oskar Dabski

“Sprawa Janusza W.”
[Janusz w. Case] (dir. Wojciech Jagiełło)
Random taxi driver (Henryk Gołebiewski)
dies n a car accident caused by popular TV
presenter Krzysztof (Michał Czernecki). Will
the media concern, Krzysztof’s employer, be
able to save good image of its star? Film is
based on short story “Oko za oko” [Eye For
An Eye] by Agnieszka Dłuniewska and
refers to the Fifth Commandment “You shall
not kill.”
Wojciech Jagiełło – born in 1973; graduated from Warsaw University of Technology major in
Architecture, The Polish National Film, Television and Theater School in Łódz – major in
editing, and Andrzej Wajda Master School of Film Directing. He was editor of multi-awarded
“Arii Divy” directed by Agnieszka Smoczynska, and also “Kierunek: Islandia” [Direction:
Iceland] directed by Kalina Alabrudzinska. He lives in Warsaw.