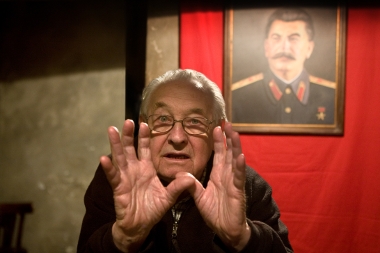 'Andrzej Wajda: Let's Shoot!' is an extraordinary record of a few months of struggle on the set, showing an atmosphere of work and a picture of immense film machinery, and at same time presenting the truest and intimate portrait of the Master of Polish Cinema, the Oscar winner. In 1957 Andrzej Wajda won the Silver Palm in Cannes for his film 'Canal', along with 'Seventh seal' by Ingmar Bergman. We meet him 50 years later, as the author of many important films, such as 'Ashes and Diamonds', 'Man of Marble' or 'Danton', now directing one the most important films in his career, 'Katyń', about the massacre in which thousands of Polish officers, including Wajda's father, were murdered by the Soviets, during World War II - a tragedy left unspoken for decades.

During the shooting of the film, 4 young documentary filmmakers - his former students had a chance to get closer and see how their Master works on his most intimate story. Extraordinary for his sensitivity, immeasurable passion, the feeling of mission and great diligence. But also in moments of tiredness, joy, failures, in conversations with people. Perhaps it is only on the set where one can see what Andrzej Wajda really is like.