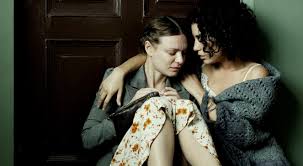 Radom under Nazi occupation. A photographer and his daughter Janina, acellist, try to survive in the harsh reality. To Janina's surprise, her father decides to give shelter to Ester, a young Jewish woman. Overtime, a bond forms between the two women, which makes it easier for them to cope with their dif?cult situation. When the father is taken away by the Nazis and the women are left to fend for themselves, their relationship becomes increasingly obsessive.