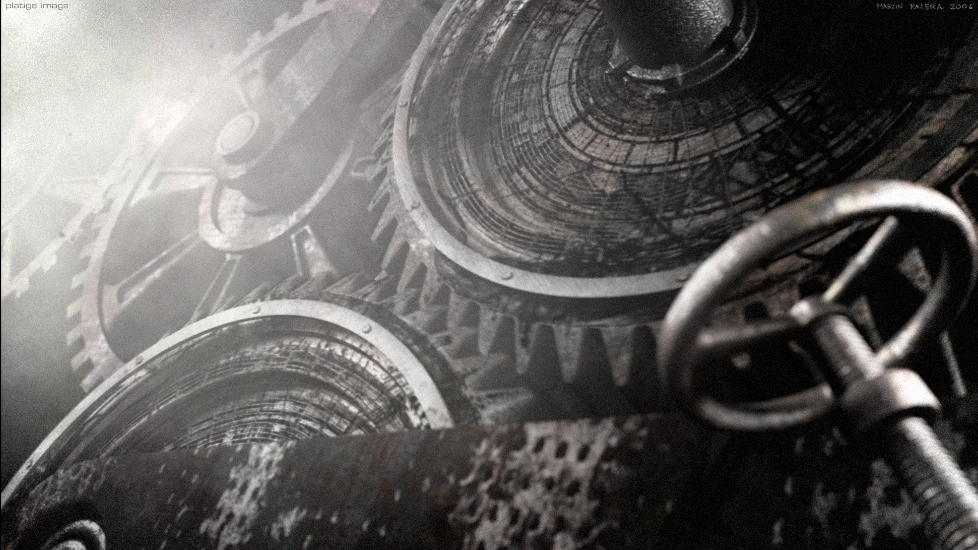 An industrial plant, once the height of glamour, nowadays a mechanical space, harsh and cold. In this degenerated and godforsaken world Moloch, a wayward machine which awakes from lethargy every now and again to stir up the worst human instincts is in poweSynopsis

An industrial plant, once the height of glamour, nowadays a mechanical space, harsh and cold. In this degenerated and godforsaken world Moloch, a wayward machine which awakes from lethargy every now and again to stir up the worst human instincts is in power…

music and sound effects
Music was made simultaneously with the film making process. The picture had an influence on the music and the music altered the picture. Music and sound effects have been taken care of by a group called Demodoll (Maciej Pazera, Dawid Szwec). Its style, heavy industrial sound matches the film convention. This convergence was not accidental and allowed a completely personal creation devoid of the elements of the so-called applied art. It also let the two elements of the animation film, sound and image, to complement each other.
Sounds of various origin were composed, from live instruments, virtual ones, sounds from the surrounding, bank samples to vinyl records. This collage, similarly to the film, has become the only means for the authors to obtain the surreal sound.

film production
I have been working a long time on the film. Its first vague sketches were created during the fourth year of my studies at the Academy of Fine Arts in Cracow. But it wasn’t until the final year of my studies that I seriously got down to work.

My interests in Polish and Russian science fiction literature and industrial sound have influenced the form of the film. Finally deathmatch computer games have finally inspired me in the production of the film. In those games a dozen of animated characters fight at an arena where each person is obsessed with a crazy desire to kill. There are no rules, but there is time limit in which you have to eliminate as many opponents as possible. When the limited time is over, the arena goes empty until new players show up. I wanted to obtain a similar effect in my animation film.

I would like to mention that “Moloch” was made in the initial version as a diploma in the animated film studio of prof. Jerzy Kuca at the Academy of Fine Arts in Cracow. Then Platige Image got interested in the film. As a consequence we started cooperating and thanks to the cooperation a student film meant for television has been turned into a production fulfilling the requirements of the cinema film. It’s been two years since a concept of the final plot was born – says Marcin Pazera.

Besides a purely commercial activity we produce auteur animation films. We support young talented artists thanks to which such films as those by Marcin or Damian Nenow are made - says Jarosław Sawko, the president of Platige Image.

The essence of the vividness of the film is a mixture, a composition of several techniques in such a way as to make them create a new quality. The main assumption was to eliminate the artificiality which accompanies pictures made entirely in the 3D technique that’s why all the set design and textures on the characters were hand-painted. Projecting a handmade picture from a camera onto a 3D space was most helpful. Such texturing of space both makes the job easier and more pleasant, saving much time. Unfortunately, such technique can be used only when camera moves only slightly so dynamic shots were made in the traditional way.
Merging all the techniques used in “Moloch” so that their use was impossible to discern had a significant meaning to the final look of the animation. It turned out to be a long and painstaking process.

Character animation is another complicated task we had to face. A program created by Łukasz Pazera turned out to be functional because it enabled a quick and effective animation. Additionally, a technique called rotoscopy was used: the animator sets poses of a digital character in the key phases of movement based on a previously recorded material with a real actor. In other words it is copying the movement of a live being and thanks to this animation looks more realistic and neat.

Enshrouding a great majority of the scenes with billowing clouds of smoke gave the film a special atmosphere. Such simulations for a computer are very laborious and need long calculations hence some of the smoke was generated on the computer and the rest is a real recording from a professional studio.

director
Marcin Pazera - born in 1980. Graduated in 2005 at the Academy of Fine Arts in Cracow, with diploma of animated film under the supervision of professor Jerzy Kucia. Despite his young age his works have been frequently exhibited and he received numerous prizes, e.g. first prize DigiTechMedia 2004, category of Computer Graphics. An author of drawings, posters, illustrations, video clips and animated films. Currently he is an assistant at the Animated Film Studio of professor Krzysztof Kiwerski at the AFA in Cracow, Poland.

production
Platige Image (www.platige.com) - a leading post production studio in Poland, awarded many prizes. It specializes in making computer graphics, 3D animation, digital special effects and image composition for advertising and films. The company has produced several hundred clips, TV commercials and title sequences of many programmes. The studio is involved in production of animated films. Such films as Oscar-nominated “The Cathedral” and a BAFTA-winner “Fallen Art”, both by Tomasz Baginski, were produced by Platige Image.
Recently the company has extended its activities and makes films for a computer game “The Witcher” produced by CD Projekt Red.