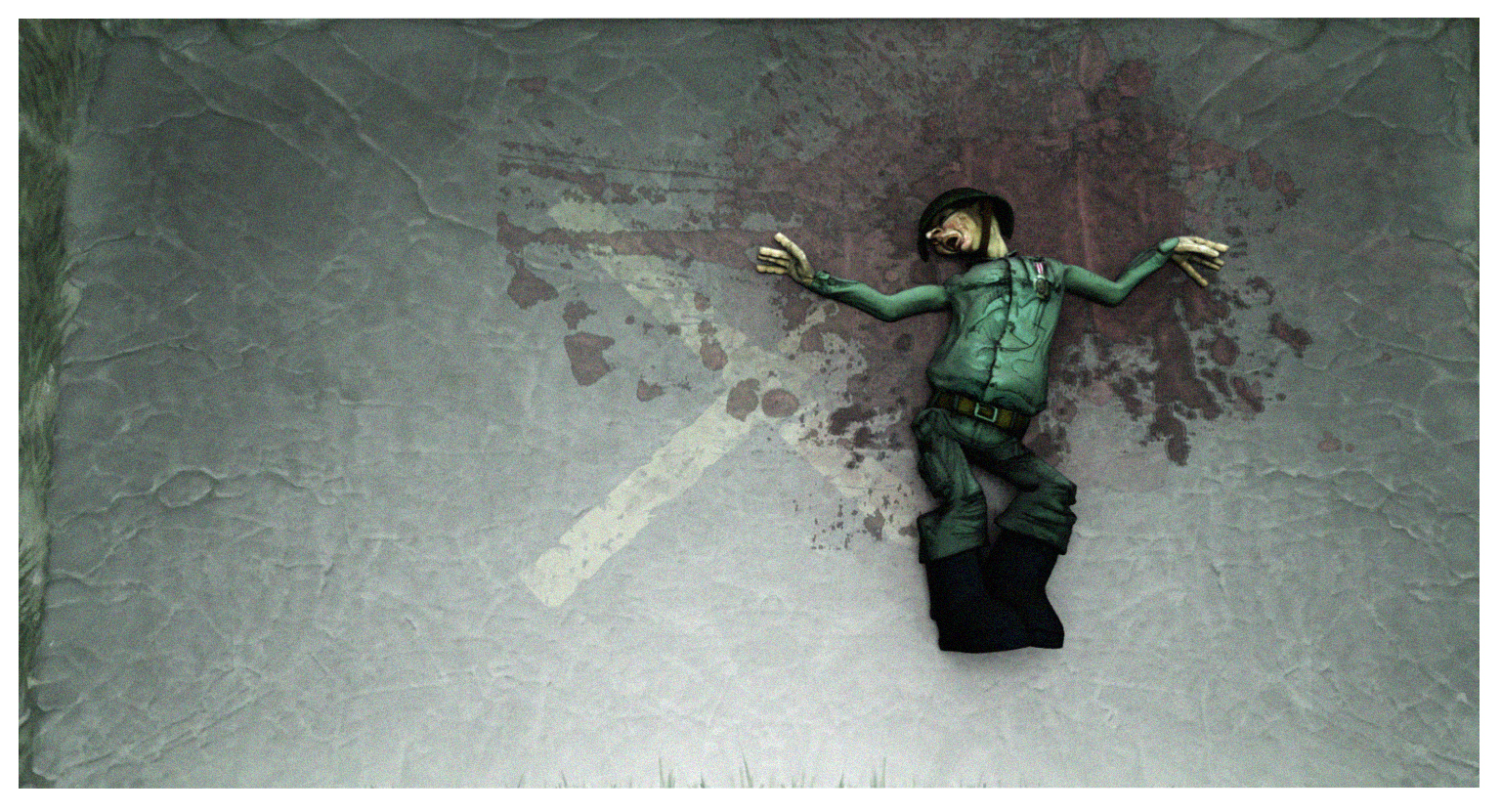 synopsis
Atoll. An old, forgotten military base in the Pacific. Soldiers who have lost their minds due to the hardships of past missions, and exemplary officers the Army can’t yet get rid of are sent there. There, far away from civilization, laws and rules they nature their insanities. Sergeant Al cultivates his love for the brave soldiers. Dr. Friedrich cultivates his talent for photography. And the old, mentally lost General A creates his art. He uses neither paper nor canvas. He attempts something completely different…

inspirations
‘Fallen Art’ is Tomek Bagiński's second short animated film for theatrical release. It is still the same technique Tomek used in the previous film, although stylistically very different from the climate of ‘The Cathedral’.

‘I needed a breath of fresh air after the pathos of ‘The Cathedral’. It cost me a lot of time and energy. This time around I wanted to try a lighter style’ - says Tomek.

The idea for ‘Fallen Art’ came up during the final stages of production of ‘The Cathedral’. It was supposed to be a story about the military, filled with dark humor and a touch of hidden meanings. Writing the screenplay, the military theme seemed innocent enough. Sort of a light satire with delicate controversy...Now the film will probably be received much more seriously. I chose a particular technique, where months go by from simple brainstorming sessions to the grand finale’ - adds Tomek.

The main theme is called ‘The Asphalt Tango’ by a Balkan band called Fanfare Ciocarlia.
Kuba Pietrzak and Wojtek Mularczyk from the Post Meridian Productions studio agreed to produce the soundtrack. ‘We have worked together on ‘The Cathedral’ earlier, so naturally it was the first place I went to looking for sound production’ - says Tomek.

‘Esthetic concept of the film assumed the use of realistic sound effects, and the avoidance of stylizing and colorizing of sounds, typical of animated films. The key to creating a specific mood was composition and montage of the effects, and utilizing Dolby Digital we could show the rich and multilayering of the soundtrack’- says Kuba Pietrzak.

film production
The main assumption of the technique used in the film was the combining of the modern language of computer animation with the classical hand painting so that the picture would gain the feeling of an actual painting. Almost every background is painted, as are the characters. Japanese anime and amateur camera movements were mimicked to achieve the feeling of an ordinary handheld camera, instead of predictable computerized movements. Character animation was a great challenge. Grzegorz Jonkajtys, one of the key animators, used a special software to bring digital characters to life in a three dimensional environment. The process of creating such ‘digital puppet’ consists of creating a virtual skeleton inside a three dimensional character, then programming special controllers, which the animator uses to manipulate the character. Later on, the animator creates specific poses at key frames, which make up the main phases of movement.

‘My biggest challenge was animating the furiously dancing general. Taking into account his physiology and rather large size it was very difficult to make him perform such a dynamic dance’ - says Grzegorz Jonkajtys.

Right from the start, the film has been divided into 6 sequences called acts, which in turns were made up of 75 shots. Each one of the shots received a catalog and a number. That is a huge amount of data, but special naming convention made the work easier especially towards the end of the production when minor corrections were required. The film weights at around 300 gigabytes, and took approximately 6 weeks to render. It took around a year and a half from basic screenplay drawings to the final product. The actual work took about 8 months.
I tried to utilize the computer only where it would speed up the process and increase the quality. Most of the time I tried to give the co-creators of the film artistic freedom”- concludes Tomek.

few words about production
Production and execution of short films for theatrical release is a secondary objective at Platige Image, which is normally working for the advertising industry. "I'm very happy that people like Tomek want to bring their ideas to life at Platige Image. We're trying to support and help them in the process, because the production of such projects is not only a great way of promoting our studio in Poland but internationally as well"- says Jarek Sawko.

„Fallen Art" is not the work of a single individual, as it was in the case of „The Cathedral”.
It is a collaborative effort of several artists, who in the most part are employed by Platige Image.

„We would most definitely like to develop an internship program where talented artists gain valuable experience by engaging in regular production work at our studio" - says Marcin Kobylecki.

That is how Rafal Wojtunik, who created the concept art for the film, arrived at Platige.

„I found Rafal while browsing internet forums dedicated to computer graphics. His works clearly showed that he knows how to use color and pencil, and that he is a very gifted and talented artist. Rafal is an exceptional artist, so I suggested he work with us on the film. First we needed to create the character of the Doctor. I liked the sketches so much that I asked Rafal to create the concept art for the entire film” - says Tomek.

Rafal Wojtunik: “The ideas were born while I was watching the storyboards and reading the story. From the beginning Tomek assumed that the characters will be rather realistic, but when he saw them, he agreed they will fit perfectly to the overall climate of the film. I wanted the characters to look weird enough to show how twisted they are, and at the same not to be associated with any particular army”.

director, producer
Tomasz Bagiński (born in 1972) –Animator, Film Director. He is a self-taught artist. He quit his studies in architecture to make films. His first student film called “Rain” won several local prizes in 1998 and became a pass to Platige Image. From 1999 to 2002 he worked on and off on his serious short debut, “The Cathedral”. The film gets the main prize, the Best Animated Short Film in 2002 in the biggest animation and special effects festival SIGGRAPH. A year later it receives the Oscar nomination in the category Best animated Short Film. In 2004 he makes his second short entitled “Fallen Art”. In 2005 he wins the prize of the jury at the SIGGRAPH festival, simultaneously becoming the first artist in history to get both main prizes. The success of the participations has been confirmed at a few dozen festivals. In 2005 Bagiński obtains the BAFTA award for the short animation film. In between his projects he works on special effects and animation for commercial and film purposes.