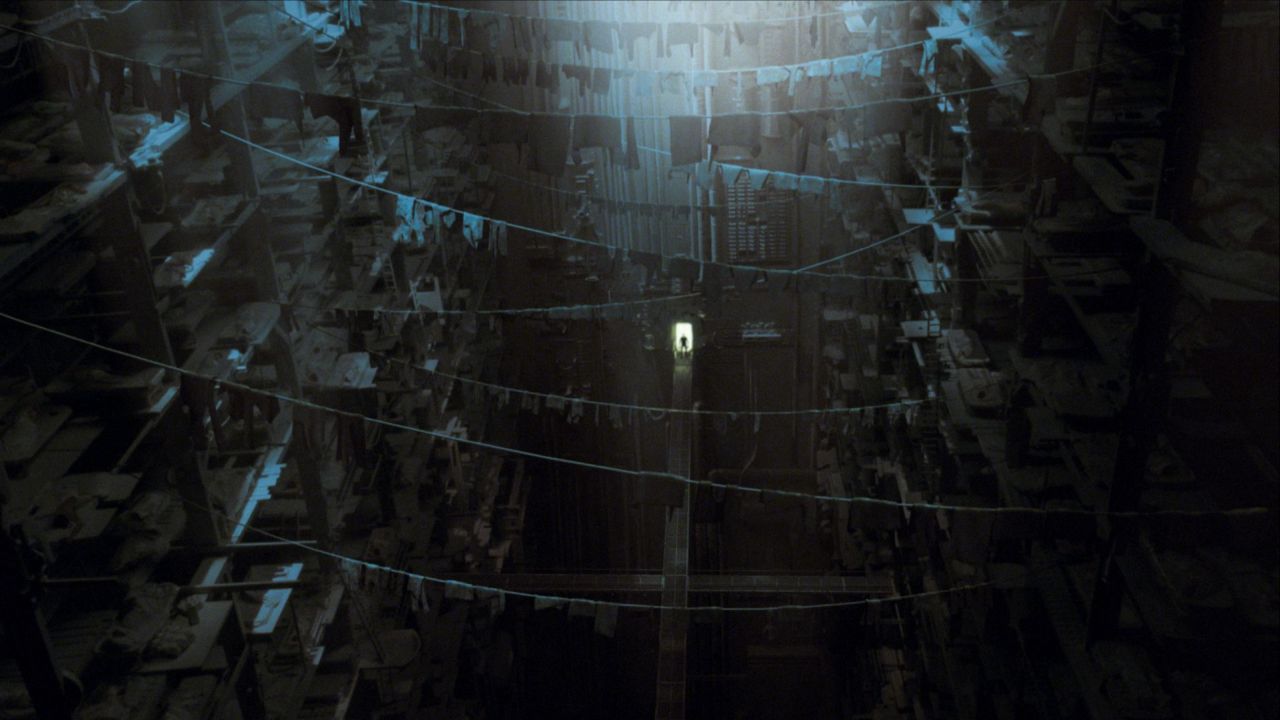 synopsis
An unknown virus has destroyed almost the entire human population. Oblivious to the true nature of the disease, the only remaining survivors escape to the sea. In great ships, they set off in search of uninhabited land.
So begins the exodus, led by one man ...

inspirations
During my stay in Italy I had the chance to see the catacombs. It’s a place where the first Christians were buried. There used to be tuff mines whose corridors were used for burying those who believed in resurrection and didn’t want to be cremated as most Romans were at that time. These impressive underground tunnels, a dark and murky maze, were the first impulse which made me think about a screenplay for a film - says Grzegorz Jonkajtys.

The underground cities of the dead inspired the director visually. Rectangular tombs carved in coarse walls, placed on several levels and resembling a honeycomb straightaway became a model for the interior of ships.

We wanted the style of 'Ark' to stray completely from
a conventional picture associated with computer animated films and the visual side to be characteristically exaggerated. Artificiality, precisely assorted objects, details of set design and character animation highlighted certain features of the film and focused the viewer’s attention on the story - adds Marcin Kobylecki.

concept/idea
The film is based on a fairly complex and symbolic storyline reflecting the dramatic nature of life and the inevitability of certain events.

When I was working on 'Ark' I tried to keep my distance and construct the story so that after watching the film you would’t be able to judge it unequivocally. I wanted to create a sort of insatiability which would push the viewer to watch it again and think about it - says Grzegorz Jonkajtys.

characters
The essence of the visual side of characters is the artificiality deliberately created by the director, contrasting with the actual set design.

In the early production phase of the film I assumed that each character would have physical animal features.
I quickly arrived at the conclusion that I could be suspected of a cliched use of a biblical motif. The character concept evolved with time. I decided to introduce a highly exaggerated style. The essence of the character image is a major unnaturalness of the nature of movement and look. Deformed, suffering and terrified faces, disproportions, powerful esthetics in relation to real elements of the surrounding intensify the image of the main character - describes Grzegorz Jonkajtys.

music
The producers asked two artists, Paweł Blaszczak and Adam Skorupa to compose music for 'Ark'. Both agreed to take part in the project.
The director created first provisional tracks, so called “temp tracks” for the first working shots which rendered the atmosphere and the peculiarity of the picture. They became a point of reference for the right direction of composing music.

Adam and I joined the team working on 'Ark' over a year ago. Then the film was made of only a few single scenes to which we wrote first experimental drafts of the soundtrack. We waited for the final picture impatiently to start the proper work on the music. When we saw the whole film three months before the end of the production, we both realized we were working on a really peculiar project - says Paweł Blaszczak.

The construction of the film and screenplay forced the composers to take a very careful approach towards the interpretation and creation of music. In the first place the most important thing was to keep the balance between the delicate and dark style so that the emotional reception of a viewer wasn’t disturbed.

The scary thing is that working on 'Ark' led me to a kind of musical schizophrenia I couldn’t shake off for a few days. When I got down to writing other music my mind wandered off to dark and damp corridors of 'Ark'. This nightmarish reality clung to me even if I didn’t compose that day. Throughout the whole time when I created music for this film, I was mentally stuck in this glum uneasy story - continues Paweł Blaszczak.

As a result the film is accompanied by a sad subdued track, a bleak interpretation of existence. It’s not until the end that emotionally-charged choir music sounds which highlights the nature of the story.

We’d like to give regards to the director who let us freely choose the instrumentaria thanks to which in the last scene the music became more important than the picture - states Adam Skorupa.

I assumed that the character has to sound as if we were listening to him with a stethoscope - says Adam Skorupa.

Every tiny move, every gulp, every brush of a hand over an unshaved face is strongly supported by sound. The character’s breath assumes the narrating role. Through pace and intensity it highlights emotions tormenting his mind in particular takes. It took a long time to set the sound of breathing in and out apart from the sound of hundreds breaths that we had recorded. But the greatest challenge was the sound revival of viral cells seen through the microscope, as Adam Skorupa himself claims:

I am sure that in the real 'microscopic world' such a sound doesn’t exist. I had to create something which would keep to the realistic conventions and would sound plausible for the viewer.

film production
Work on the film ended in April 2007. Production stage took fifteen months, but two years passed from the first concepts till the end of work on the film. Paradoxically, it turned out that work on an eight-minute film took so long.

The picture was created using an unconventional technique of making animated films. It’s based on hand-made models which were photographed using Nikon D70s. For moving shots we used Motion Control which enables the camera to repeat the same move perfectly keeping to the trajectory. Using this system enabled making a few shots in different versions of lighting.

Thanks to this solution we could simulate natural lighting in any scene. Then using 3D software we added digital characters and elements to such a 'photographed' material.

Creating a set design rich in detail would have been very complicated, tedious and in some cases probably even impossible. Besides, lighting and rendering of such detailed scenes would have required huge processing power. Using this technique allowed to avoid this problem. On the other hand, manual work on making such models was a kind of refuge after a dozen hours spent in front of the computer every day - explains Marcin Kobylecki.

When making 'Ark' a program Softimage XSI.was mainly used. Other programs: 3ds Max, LightWave and Modo. For composition we made use of After Effects oraz Digital Fusion.

Every artist, regardless of his domain, above all cherishes the freedom of creativity. Individul choice of tools helps release the potential and the ability to bring forms, images and meanings, which are sometimes completely unknown, to life.
I didn’t limit the artists working on the project in any way. Everyone used graphic programs that could meet their creativity. Currently existing 3D systems allowing efficient migration of elements, cameras and whole animations enabled linking components of 'Ark' created by my colleagues - says Grzegorz Jonkajtys.

team
According to producers, the biggest challenge of the project was its coordination. Synchronizing work of two teams in two different places of the globe (Poland and the USA) forced them to work out a fairly efficient system of communication. You could think that the Internet was helpful, but exchanging a large amount of information and data in such an advanced production can be tedious.

If we take things like time zones into account, synchronizing the whole production required a lot of patience from us, especially if we mean communication between particular people from the team - says Marcin Kobylecki.

During a dozen months of hard work the director was helped by many talented people. The team was backed by Polish graphic artists as well as those he works with on
a daily basis in CafeFX.

Some created single elements, models, textures and others, like Marcin Pazera, helped me in particular sequences. Sometimes my friends from the USA, Akira Orikasa or Joe Hoback, worked on one-minute takes. Damian Bajowski proved to be indispensible. His concepts and matte paintings visually enriched the initially 'plastic' set design. I would like to thank the whole team. Effort, perseverance and devoted time of all the people made it happen - states Grzegorz Jonkajtys.

director, producer
Grzegorz Jonkajtys (born in 1972) - Graphic and Animation Artist, Director. Graduated from the Faculty of Graphic Arts at the Academy of Fine Arts in Warsaw. He received an honorable mention from the dean of the Academy. His debut short animated film entitled 'Mantis' (2001) gained widespread acclaim winning numerous prizes at Polish as well as international film festivals. For many years he has been working in an American company CafeFX (www.cafefx.com), which specializes in special effects for big Hollywood productions. Currently he works in Industrial Light and Magic in San Francisco. He took part in creating special effects to such films as 'The League of Gentlemen', 'Gothika', 'Hellboy', 'Sin City' or 'Pan's Labyrinth'. Recently he has completed work on his second animated film entitled 'Ark'. At the moment Grzegorz Jonkajtys works on his feature film debut entitled ’36 stairs’.