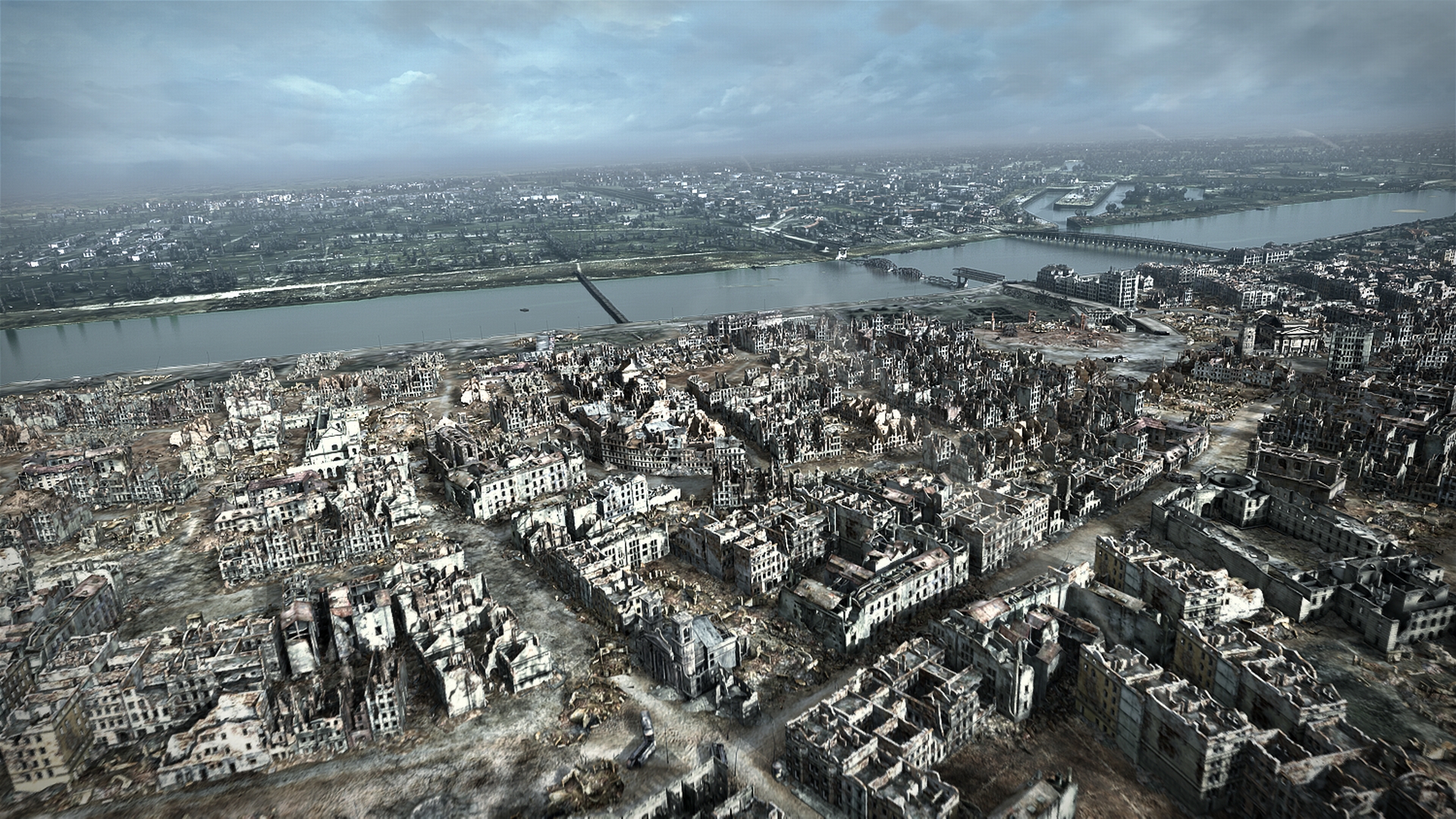 synopsis
Spring, 1945. The Liberator plane lowers its flight altitude, goes below the cloud line. It flies north, along the Vistula river and finds itself above the recent uprising fighting grounds, above the destroyed Warsaw.
This is the beginning of City of Ruins, Poland’s first digital 3D (stereoscopic) re-creation of a city destroyed during the Second World War. The Warsaw Rising Museum trusted Platige Image with producing their idea.. The project’s objective was, first and foremost, to re-create the horror of the destroyed, deserted Warsaw, to overwhelm the viewers with realism of the situation seen from
the perspective of a person flying the Liberator plane.

concept and production
The Warsaw Rising Museum decided to make a film whose basis would be the aerial photos. Although the Museum had at its disposal a wide documentation from the times of the Rising, it issued an appeal to the Warsaw citizens to submit photos that could support the realization of the project. In order to be true to the details of each ruined building, a huge number of materials needed to be collected. They were finally handed over to Platige Image. It is very difficult to put in words what the act of totalitarian social engineering conducted by the Germans in Warsaw in 1944 was: they destroyed the city and displaced its inhabitants, says Jan Ołdakowski, the Director of the Warsaw Rising Museum. Having been offered to produce the project, the Platige Image team realised that the project was an enormous technological and historical challenge. Putting such a gigantic amount of information into the system and processing it, then combining the source materials a whole is a tremendous task..
As a part of a project, a database was designed, containing elevation, cartographic, geodetic, urban planning and architectural data for Warsaw in April 1945. Based on the database, a simulation of the flight was prepared. We would like the viewer to fully realise the largeness of the destruction of Warsaw whose fate can only be compared with that of Carthage. Extensive research, thousands of photos and the most modern technology allowed us to show that, which falls outside description.
The result exceeded all expectations, surprising historians and experts on Warsaw as to its size and reality. Ridley Scott recreated a small piece of the Roman Coliseum in Gladiator, we decided to build the whole city, says Jan Ołdakowski It took a year to see the result. The film is over five minutes’ real-speed flight on a plane. In order to precisely recognize the specific places destroyed during the war, the viewers will certainly have to watch it more than once.
City of Ruins is an innovative form of presenting significant and decisive historic events. A common approach of the Warsaw Rising Museum and Platige Image is a door to larger film productions, such as a virtual walk around the destroyed Warsaw, says Marcin Kobylecki, executive producer.

beginning the works
In the preparatory stage. Damian Nenow, the director of City of Ruins, and his team took a helicopter flight over the contemporary Warsaw on the route close to that covered by the Liberator. The recorded material was used by Nenow to plan all parameters of the virtual flight and producing the final camera animation.
The flight plan was designed basing on the authentic flight logs of the Liberator planes and meticulously prepared list of easily recognisable key buildings and places in Warsaw. The flight animation was prepared in such a way that it most precisely conveys the conditions of a flight on a real plane, mostly its speed and the limited room for manoeuvre.
In order to produce a digital flight over the destroyed Warsaw, it was necessary to take several reference flights whose purpose was to record film and photographic documentation as well as establishing the angles of view, perspective etc. The Warsaw Aeroclub and the 36th Special Transport Aviation Regiment were most helpful in this respect, says Piotr Śliwowski, the project manager. Among the key elements that needed to be decided on in the initial stage of the project was, among others, finding descriptions and colour photos, in order to establish the colours of the city, the degree of tree-covered areas and to establish which buildings and landmarks stand out from the cityscape visible from the plane, which in turn was confronted with the bird’s-eye view photos of contemporary Warsaw, Krzysztof Jaszczyński and Ryszard Mączewski, historical consultants say.

map of Warsaw
creating the tarrain and the positions of buildings
The prepared objects had to be placed within virtual terrain. Unique models of the selected buildings were placed at appropriate locations in the city, the rest was copied and used multiple times. This refers mostly to objects in the background such as streetlamps, trams or plant life.
Wondering how to show the destroyed Warsaw from above, we decided that the best solution would be the flight over the city on the route covered by a bomber plane that provided aid for the Warsaw Rising – approach from the south, then lowering the altitude, flight along the Vistula bed, a turn over the Old Town, flight over the Ghetto and back south. This way a viewer will be able to see the whole city, and the climax of the film will be the flight over the Warsaw Ghetto which is the place that makes the most stunning impression, says Piotr Śliwowski. Showing the whole terrain of Warsaw, preserving the layout of streets as they were at the end of the war, avoiding the loss of the quality of textures at the same time turned out to be a great difficulty for the film creators.
Presenting this huge area with the use of one or a few textures was impossible because of the specificity and the number of details of the terrain visible in the animation. Dividing the terrain into sectors turned out to be the solution. Each of them was given its unique texture. Eventually, the sectors were fitted together resembling a patchwork, the difference being the joints were levelled, says Michał Gryn, CG supervisor. Rendering and composition, i.e. the last stages of the project also turned out to be time-consuming. The calculation process itself took approximately 2 months
(rendering 1 frame takes 2 hours on average). Close to a hundred fastest computers Platige Image has at its disposal were used.

historical fidelity
Two consultants – Krzysztof Jaszczyński and Ryszard Mączewski worked ceaslessly on the project alongside the Platige Image team. Supported by their historical knowledge, “infected” with their passion, the team started working.
After a joint analysis of materials and data, we chose 35 characteristic objects which we wanted viewers to concentrate on. Soon there were questions. What degree of detail should the virtual model be given? How could we show the mass of a building closest to its true looks or such nuances as a brick protruding from a falling-apart building or bullet marks? All these production dilemmas were settled with the help of our consultants, says Michał Gryn. All buildings, whole districts and street layouts were created using the available historical knowledge. Each piece of the destroyed city was grounded in the prepared reference materials approved by the consultants: from a noticeboard to bridges and tenement houses.

stereoscopic version
Almost everyday there is a news about yet another production that will use 3D technology. After the premiere of the famous Avatar created by James Cameron, 3D film productions immediately became in vogue. Meeting the expectations of the audiences fascinated with this technology, City of Ruins was also created in stereoscopic version.
This time we decided on a subtle stereoscopic effect. The sight of the destroyed city makes
strong impression by itself. The basic objective was to simply to emphasise the reality of the
amount of destruction Warsaw suffered as seen from a significant distance, says Sebastian
Ośka, the author of the stereoscopic setup at Platige Image.

music
City of Ruins is yet another project of Platige Image sound-edited with participation of
Adam Skorupa.
Should the completed presentation have its sound edited? Should we hear the hum ofvengines, or maybe the pilots’ commands? Or maybe the film should be accompanied by piercing silence? We had to find answers to such questions during the final stage of the project. Eventually, we decided on a score, assuming that the contents presented on screen falls outside any verbal accounts, says Piotr Śliwowski. The possibility of contributing in such a small degree to such a unique project for the Warsaw Rising Museum, bringing the terror of those times closer to contemporary audiences and, at the same time, honouring the fallen people, became something very personal for me.
I used a female voice as the main conveyor of emotions; the voice resembles a mother’s cry over her child’s grave and corresponds with the sight of the „burial ground” of the destroyed Warsaw.
The mourning mood was completed by the piano playing a very sad tune filled with longing, says Adam Skorupa.

major challenges
The greatest production challenge, when working on City of Ruins, was dividing the enormous area of the city into sectors and the ceaseless synchronisation of the work of all the graphic artists.
Finally, the whole terrain of Warsaw was divided into smaller areas, and the areas, in turn, divided into over 30 sectors. Each of them covered several hundred square meters filled with various objects. Works on each of them were conducted separately, but according to the same parameters, so that, when combined, the joints were not visible.

information about the creators

project manager
Piotr Śliwowski (b. 1972)
A historian, the Head of the Historical Section at the Warsaw Rising Museum since 2005; the author of several dozen exhibition projects including managing the team reconstructing the “Liberator” bomber. Manager and coordinator of the City of Ruins project.

cg supervisor
Michał Gryn (b. 1980)
A computer graphic artist, animator. He has been working as animator and CG Supervisor at Platige Image since 2007. He participated in creating Tomek Bagiński’s latest film The Kinematograph and supervised the team working on City of Ruins.

producer
The Warsaw Rising Museum was opened six year ago on the 60th anniversary of the outbreak of the Rising. It has been visited by over two and a half million people, 500 thousand of whom are foreign visitors. It owes its popularity mostly to the modern setting solutions: the static character and traditionalism typical of Polish museums have been replaced with modern means of expression. The exhibition, harmonised with the austerity of industrial interiors, affects the visitors by means of image, light, sound and the vastly-applied multimedia effects. Apart form the exhibition activities that includes a multitude of temporary exhibitions, as well as educational and research, the Museum also conducts several projects whose aim is to spread the knowledge about Warsaw and its most recent history. It is, among others, the initiator and co-creator of the stereoscopic film City of Ruins: a simulation of a light over the ruined Warsaw.
In 2007 the Warsaw Rising Museum, having been one of the most popular tourist attractions of the capital since it was opened, was chosen by popular vote as a modern icon of Warsaw.

executive producer
Platige Image (www.platige.com)
A leading Polish post-production studio with over ten-years’ experience in advertising and film market. It has been constantly prized for its activities both in Poland and abroad. The studio specializes in creating computer graphics, 3D animation, special digital effects and image composition for advertising and feature-length productions.
Its track record includes several hundreds of advertisements, opening credits, video clips as well as special projects such as social campaigns, theatre productions and ventures commissioned by state institutions. An indispensable part of Platige Image’s activities is the production of animated films.