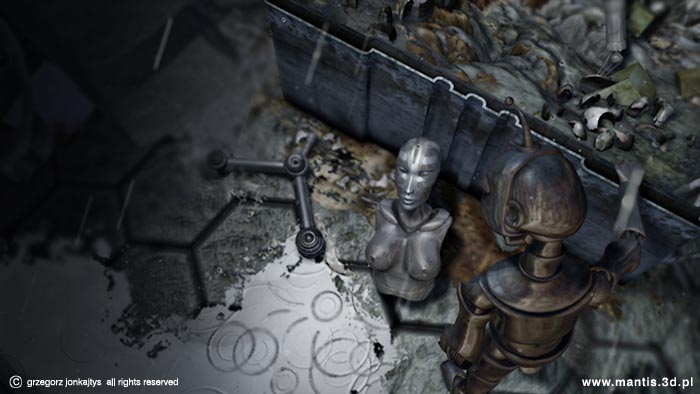 synopsis
Story of a lonely robot, trying to find his perfect companion…

director, producer
Grzegorz Jonkajtys (born in 1972) - Graphic and Animation Artist, Director. Graduated from the Faculty of Graphic Arts at the Academy of Fine Arts in Warsaw. He received an honourable mention from the dean of the Academy. His debut short animated film entitled “Mantis” (2001) gained widespread acclaim winning numerous prizes at Polish as well as international film festivals.
(For many years now he has been working in an American company, CafeFX (www.cafefx.com). For many years now he has been working in the Industrial Light and Magic (www.ilm.com) company in San Francisco)?. It specializes in special effects for big Hollywood productions. He took part in creating special effects to such films as “The League of Gentlemen”, “Gothika”, “Hellboy”, “Sin City” or “Pan's Labyrinth”. At the moment Grzegorz Jonkajtys has completed work on his second animated film entitled “Ark”.

producer
Platige Image (www.platige.com) - a leading post production studio in Poland, awarded many prizes. It specializes in making computer graphics, 3D animation, digital special effects and image composition for advertising and films. The company has produced several hundred clips, TV commercials and title sequences of many programmes. The studio is involved in production of animated films. Such films as Oscar-nominated “The Cathedral” and a BAFTA-winner “Fallen Art”, both by Tomasz Baginski, were produced by Platige Image.
Recently the company has extended its activities and makes films for a computer game “The Witcher” produced by CD Projekt Red.