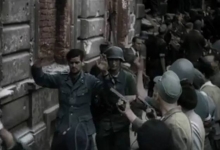 Warsaw Uprising (Powstanie warszawskie), the world's first non-fiction drama, will be released in cinemas across Poland on May 9, 2014.

Powstanie Warszawskie (Warsaw Uprising) is the world's first colorized feature film edited using black-and-white documentary footage; this 85-minute-long film tells the story of the Warsaw Uprising by focusing on two young reporters who witnessed the events. The film uses original footage from newsreels made in August 1944.

A Challenge on Multiple Levels

Six hours of original newsreel footage from the Warsaw Uprising, seven months of work, a team of consultants on military, clothing and architectural details, urban planners, Warsaw experts and historians, 1,000 hours of colour editing, 1,200 shots, 1,440 hours of colorization and reconstruction, 112,000 selected frames, 648,000 minutes of reconstruction, 22,971,520 megabytes of data; these are a few numbers that help appreciate the tremendous effort that went into the production of the Warsaw Uprising project.

Produced by the Warsaw Rising Museum

Powstanie Warszawskie (Warsaw Uprising) was produced by the Warsaw Rising Museum, with Studio Produkcyjne Orka handling the technical side. The original storyline was developed by Jan Komasa. Dialogues were written by Joanna Pawluśkiewicz and Michał Sufin. Voice actors included Maciej Nawrocki, Michał Żurawski and Antoni Królikowski. Colorization was supervised by Piotr Sobociński Jr. The screenplay was written by Jan Ołdakowski, Piotr Śliwowski and Joanna Pawluśkiewicz. The film was edited by Milenia Fiedler and Joanna Brühl and scored by Bartosz Chajdecki.

Supported by the Polish Film Institute

Powstanie Warszawskie (Warsaw Uprising) received support from the Polish Film Institute. "You will have an opportunity to see something both shocking and fascinating. Everything you see in this film - life, happiness, tears, death - it all happened in real life. It happened in Warsaw. This is a project without precedent, a success both in terms of its historical and artistic value. I am certain that this film will become widely popular around the world. I am very happy that we could be involved in this project; we will definitely support its international promotion," said Agnieszka Odorowicz, General Director of the Polish Film Institute at the film's press conference.

Powstanie Warszawskie (Warsaw Uprising) will be released in cinemas across Poland on May 9, 2014. Distribution is handled by Next Film.

One percent of Powstanie Warszawskie box-office revenues will be donated to associations of Warsaw Uprising veterans.