The New Faces of Polish Rulers 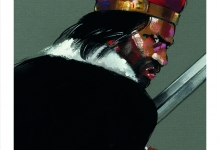 History needs its iconology. That is obvious. Even though certain changes have begun to take place, history remains to be primarily about kings. So, it is not surprising that their faces occupy our imagination to a great extent.

As Polish kings ruled long before photography was invented, we are left with more or less accurate portraits, created by more or less talented artists whose works were necessarily influenced by the prevailing style of their time. Nonetheless, almost every child in Poland can recall the faces of Polish kings, thanks to Jan Matejko and his Gallery of Polish Kings. Matejko’s artistic vision proved to be so strong that it is impossible to imagine our former rulers any other way. The late 20th century artist Andrzej Pągowski not only tried but also encouraged Waldemar Świerzy to do just this. The effects of many years of their collaborative work consisting of forty-nine stunning portraits have been made available to the public at the Royal Castle in Warsaw as of 19 May 2015.

Matejko wasn’t the only one, of course, who wanted to visualise and represent kings. Many images of royalty, both literary and visual, exist in Polish culture. One of the most interesting projects was an exhibition of portraits of kings in the Royal Castle, painted by Marcello Bacciarelli, for the last Polish king, Stanisław August Poniatowski. He painted twenty-two impressive portraits that are nearly forgotten today. As for Matejko, he didn’t actually paint any works included in the gallery except for some black and white sketches. This was a direct inspiration for Pągowski:

Then I thought Polish people deserve a full, colourful, original gallery of their kings. They deserve a Modern painting gallery, fresh in its visual form. I thought that creating the gallery and then printing it could be a national history lesson.

He requested the help of Waldemar Świerzy, his professor and friend, designer, painter, co-creator of Polish School of Posters. Świerzy is considered to be one of the most talented portraitists in Poland. He painted pope John Paul II, Nobel prize-winners Czesław Miłosz, Wisława Szymborska and Henryk Sienkiewicz, pianist Krzysztof Penderecki, Maria Curie Skłodowska and an amazing series titled Jazz Greats.

Although the first two portraits (Jan III Sobieski and August II The Strong) were somewhat of a test or practice, they were highly esteemed. The project started in 2006 and the very last of the series (Stanisław August Poniatowski) was painted only in November 2013, completed the day before Świerzy’s death. After the first twelve works were made in 2007, there was enough money to continue the project. It was only after that many problems began. The project was put off and cancelled several times due to financial difficulties and Świerzy’s accident. In 2012, Świerzy broke his shoulder resulting in a terrible injury and long rehabilitation, which threatened the ability of the eighty-year-old man to finish the gallery. Surprisingly enough, what happened was just the opposite. His work progressed even faster and the results were even more impressive:

I remember how nervous I was going to see the last portraits – first after the accident. What I saw was beyond my imagination [...] an exceptional portrait of Jadwiga. Painted with passion and amazing energy. When I saw each painting was better that the previous I joked: Waldek, what a shame you didn’t brake your arm earlier... To be honest, after the accident and rehabilitation he started to paint faster, more courageously and with even more passion. (Andrzej Pągowski)

That part went smoothly as even money was found.

The gallery as whole is exceptional. It is comprised of portraits of great individuals, powerful commanders, wise monarchs alongside petty dodgers and primitives. Artists concentrated on the facial expressions in their paintings and created both physical and mental portraits of personalities, full of life and dynamism. New and modern visions of this gallery of kings combined with the latest historical findings enable a fresh look at the past, and perhaps are particularly interesting for young people, for whom Matejko’s aesthetics might be anachronistic or simply boring.

As a result of the long term cooperation between Świerzy, Pagowski, Marek Klat (a supervising historian, who assured historical accuracy) amongst others and with the support of PKO BP, Narodowe Centrum Kultury and Kreacja Pro many works including original Matejko’s sketches are on display at the Royal Castle in Warsaw as part of the exhibition Nowy poczet władców Polski. Świerzy kontra Matejko from 19 of May until 19 July 2015. Admission is free. Moreover, in the education section, you can view collections of notes, coins, stamps and envelopes with images of Polish kings as well as five original portraits by Jan Matejko, borrowed from the National Museum in Wrocław. This exhibition is planned to be presented in other Polish cities while images are to be promoted abroad in both educational and commercial literature.

Bronisław Komorowski, the president of Poland, assumed the honorary patronage over the exhibition, opened it on 18 May 2015.